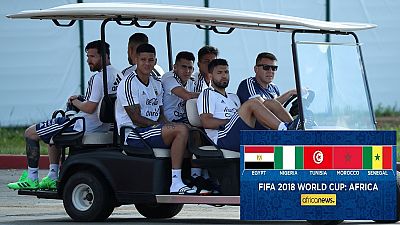 Lying a humiliating last in a group they were expected to win, Argentina must beat Nigeria on Tuesday to have any chance of progressing and keeping alive captain Lionel Messi’s dream of winning a first World Cup.

The ‘Super Eagles’, though, are bouncing after a tactical shake-up following their opening defeat propelled them to a 2-0 win over Iceland and will not fear the illustrious rivals they have met five times in six World Cups.

“We know we can do it, our confidence is coming back,” said coach Gernot Rohr whose team beat Argentina 4-2 in a friendly last November, albeit in the absence of Messi.

We know we can do it, our confidence is coming back.

Rohr dropped the misfiring Odion Ighalo and Alex Iwobi after their opening loss to Croatia, and is likely to stick with Musa and Kelechi Iheanacho against the South Americans.

A win against Argentina, who have looked shambolic in their first two games despite boasting some of the biggest names in the game, would guarantee a place in the second round.

A draw may also be enough even if Iceland beat already-qualified Croatia, depending on goal difference.

For Argentina, and the legions of fans who have made the huge journey across the world decked in blue-and-white number 10 Messi shirts and face masks, it is last chance saloon.

They must beat Nigeria and also hope Iceland do not win against Croatia, as that could send them home anyway, again depending on goal difference.

To do that, Messi and his team mates will have to improve on abject displays so far.

The Barcelona forward has looked stressed and miserable in both games, been largely crowded off the ball and missed a penalty against Iceland while he was anonymous versus Croatia.

“What’s happening to the team right now is what has happened to Argentina in these last four disgraceful years: anarchy, no leadership from the players, coaches or directors.”

Argentina’s coach Jorge Sampaoli, who has had a poor year in charge and looked utterly despondent after the Croatia defeat insisting that he alone was to blame, must hope such stinging words finally fire up a reaction from his players.