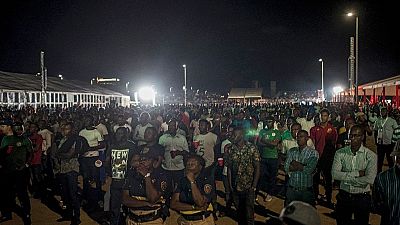 Football-loving Nigerians had more than one reason to groan about the country’s opening World Cup game: not only did they lose 2-0, many weren’t even able to see the whole match.

Some viewers complained that seasonal rains affected the signal to the satellite television channel broadcasting Saturday’s match against Croatia.
Then, the power went off completely.

The Transmission Company of Nigeria (TCN) said six power plants were shut down to prevent the “collapse” of the national grid following a pipeline failure and unspecified “technical issues”.

For two days, the grid lost 1,087 megawatts of electricity. By Tuesday, generation had recovered to 3,876.9 MW following repairs of the ruptured pipeline.
The TCN said gas was “gradually building up in most generating stations and in a day or two days it is expected that gas and power supply would be back to normal”.

But the widespread blackout, which forced those who could afford it to turn to expensive diesel-powered generators, once again highlighted Nigeria’s perennial electricity problem.

Installed capacity is 7,000 MW but actual production for a country of more than 180 million has hovered between 2,500 and 5,000 MW, according to TCN data.

Economic rival South Africa in comparison generates 45,000 MW for 53 million people.
Gas thermal plants generate about 85 percent of Nigeria’s power while hydro-electricity supply the rest. Several projects are in the pipeline to boost production.But they will add only about 5,000 MW to installed capacity.

Shortages of gas, plus sabotage and vandalism of pipelines in the meantime has cut supply to the country’s 22 gas thermal power plants and three hydro plants.

Industry bodies said it was time for a rethink as irregular power supply was compounding difficulties faced by Nigerian businesses trying to recover from recession.

“Many industries, especially the small-scale ones, are spending a lot on petrol and diesel to power their plants,” said Muda Yusuf, of the Lagos Chamber of Commerce and Industry.

He urged the government to “revisit the privatisation model because we are not just getting it right”, accusing operators of lacking the financial and technical capacity to run them.

Beyond being deprived of watching the Super Eagles play in Russia, hard-pressed consumers say poor service and high tariffs are hitting them in the pocket.
In March, the state-run Consumer Protection Council warned DisCos against arbitrary billing, illegal charges and disconnections.

Nigeria’s next match on Friday is against Iceland, the world leader in renewable energy production.