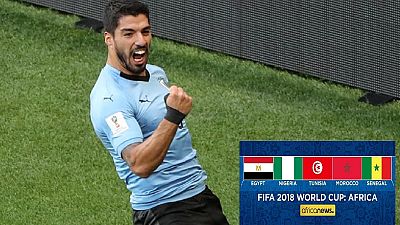 Spain gets their first win at this year’s World Cup, after holding on to its 1-0 lead against Iran.

A tight day, but #POR #URU and #ESP all do what they need to do. #IRNESP pic.twitter.com/6cQ6xtuIyC

Diego Costa adds to his tally at this year’s World Cup, with a goal in the 57th minute.

Even if you conjure up the best plans to halt Ronaldo, he will find a way to break free. He always makes the difference, at the minimum to put his side on the right track and at best to win the game for them.

Up next is another Group B tie where Spain take on Iran. Iran will be hoping to follow its opening match win over Morocco with another upset, while Spain will be desperate to add to their points and goal difference tally.

We have the Starting XIs for #IRN and #ESP #IRNESP pic.twitter.com/pZQvmZ0B3V

The game which will be taken very seriously by Spain who need to improve their goal difference and points tally after the opening draw with Portugal, will be a clash of attacking prowess against solid defending.

The Spaniards who have a wealth of attacking talent at their disposal must find a way to break through the defensive wall built by Portuguese coach Carlos Queiroz. The 65-year-old former Real Madrid coach and Manchester United assistant, oversaw Portugal at the World Cup in 2010 and Iran four years ago in Brazil.

Iran did not concede a single goal until the last of their 10 final round Asian qualifiers when their spot in Russia was already secure, while Spain haven’t lost a game in 21 matches.

The Uruguay win over Saudi Arabia marks the end of the road for the Green Falcons an
d Mohamed Salah’s Egypt.

Russia and Uruguay are through to the next round of the World Cup.

And so, Group A after two rounds of fixtures…

Luis Suarez scores his first goal of the tournament, and Uruguay are in the lead.

?LuisSuarez9 is the first player to score for Uruguay at three World Cups

? We've had ANOTHER goal from a set-piece at this #WorldCup#URUKSA pic.twitter.com/H22ZvQxtEX

Will Saudi Arabia avoid elimination at the hands of Uruguay who are led by lethal striker Luis Suarez?

The match between Uruguay and Saudi Arabia could spell doom for yet another African side.

The Group A fixture could confirm qualification to the next round for the South American side and the hosts Russia, and effectively eliminate Mohamed Salah’s Egypt.

Saudi Arabia, who were humbled by a 5-0 defeat to the hosts Russia in the opening game of the tournament, have declared that they are out to ‘prove that we are competitive’ in their clash against Uruguay.

“We are anxious to change our image, we need to forget our problems and focus on the positive elements to bring happiness to the hearts of the Saudis,” said Saudi Arabia midfielder Taisir Al-Jassim, whose team also suffered a mini plane scare as they landed in Rostov-on-Don on Monday.

Among the challenges facing Saudi Arabia will be how to contain Luis Suarez, but Al-Jassim does not want to obsess over the influential Uruguay striker.

Uruguay will be playing with extra motivation, knowing that a win against the Green Falcons would seal their qualification to the next stage after Egypt lost a second consecutive game to Russia on Monday.

Morocco are eliminated from 2018 World Cup

It’s all over for Morocco, as they lose 1-0 to Portugal and become the first team to be effectively knocked out of the 2018 FIFA World Cup.

Ronaldo opens the scoring for Portugal.

And the match is underway here at the Luzhniki Stadium in Moscow.

In less than an hour, Morocco will take on Cristiano Ronaldo’s Portugal in a fixture that both teams need to win.

Morocco’s coach Herve Renard has said it might prove futile to lay out a plan to neutralise five time world player of the year Ronaldo. Instead, he said his side will do their best to ‘make him less exceptional’.

“Even if you conjure up the best plans to halt Ronaldo, he will find a way to break free. He always makes the difference, at the minimum to put his side on the right track and at best to win the game for them,” Renard said on Tuesday.

Ronaldo scored a hat-trick in the game against Spain to underline his superstar status and spark the tournament into life.

Morocco need to win to keep their chances of going past the group stage alive after they lost to Iran in the opener, while Portugal will also be playing to win having earned just one point in the draw against Spain.

Day 7 of the 2018 FIFA World Cup in Russia could have some dramatic implications for the fate of teams in Group A and B.

As Uruguay takes on Saudi Arabia in the second round of Group A action, a win for the South Americans would eliminate both the Saudi Arabians and African side Egypt, who lost 1-3 to Russia on Tuesday.

In Group B, North African side Morocco will be aiming for a win against reigning European champions Portugal, after their heartbreaking loss to Iran in stoppage time of their opening game.

Iran will take on 2010 world champions Spain, who played out a thrilling 3-3 draw against Christiano Ronaldo’s Portugal in their opener.

Welcome to Matchday 7 of the FIFA #WorldCup