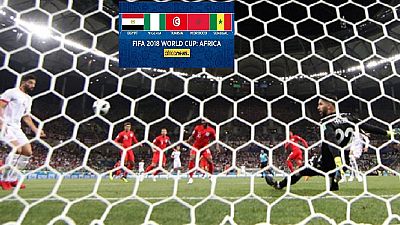 Tunisia defend so deeply, and are undone by a Harry Kane goal in stoppage time.

We’re not favourites but if we have a good day we can do something good, anything can happen.

Both Egypt and Morocco conceded late goals in their opening games.

Tunisia scores the equaliser through a Sassi penalty, after Ben Youssef was fouled inside the box by Walker.

It’s time for the final match of the day.

On to our final match of the day…#TUNENG // #WorldCup pic.twitter.com/RkkMXsDq0T

Tunisia will be hoisting not only their country’s flag, but many Africans on the continent will be hoping for a good result in this game after their compatriots have faltered in their campaigns at the tournament. Egypt, Morocco and Nigeria all lost their opening games and it now lies to Tunisia and Senegal to reverse this fortunes.

Tunisia are the highest ranked African side and had decent preparations to the World Cup, holding Portugal to a 2-2 draw in May and only losing 1-0 to Spain with a late goal earlier this month.

Their coach, Nabil Maaloul is nevertheless wary of an England side that he says is different from the 2016 class that lost to Iceland at the Euros. He says Gareth Southgate’s team has shown improvement and that the team in Russia is even better than the class of 1998, which included David Beckham and Michael Owen.

Maaloul is particularly wary of Tottenham Hotspur’s forward, Dele, Alli, whom he describes as ‘excellent’.

And Belgium have turned things around in the second half, scoring 3 goals to go top of Group F, ahead of the England-Tunisia clash.

Barely four minutes after his first goal, Lukaku scores a second, which makes it 3-0 for Belgium against World Cup debutants Panama.

Lukaku doubles the lead for his side, thanks to a brilliant assist from Kevin De Bruyne.

Belgian forward Mertens scores an amazing volley to give his side the lead in the 53rd minute.

And we are underway here at the Fisht Stadium in Sochi. Who will draw first blood in the opening match of Group G.

We now move to Sochi, where the opening match of Group G will be staged.

Belgium take on Panama, in a group that also has England and African side Tunisia.

Thoughts on the line-ups? pic.twitter.com/ZcBE3uYytK

Belgium who are ranked 3rd in the FIFA world rankings will be wary of the slow starts that their fellow highly ranked teams have had at this year’s World Cup.

Germany, Brazil, Argentina, Portugal and Spain have all had scrappy starts to this game, losing or managing draws in their opening games. Only 1998 world champions France have so far been able to win their opening game, and even so it took the intervention of video assistant referees (VAR) and goal line technology to award French goals against Australia.

Both coaches have expressed optimism about their chances in Monday’s game.

“We’re not favourites but if we have a good day we can do something good, anything can happen,” Panama coach Hernan Gomez told reporters ahead of Monday’s Group G match in Sochi.

“Getting to the World Cup was a great result for Panama and the Panamanian people. A team that knocked out a nation like the United States deserves a lot of respect. They are fighters, they have a great mentality and are very competitive,’‘ Belgium coach Roberto Martinez said in an attempt to downplay expectations.

And it’s full-time. Sweden have condemned South Korea to yet another defeat at the World Cup by a European side.

Sweden are now joint top leaders of Group F, with Mexico who won by the same scoreline of 1-0 against Germany.

Even in possession, but #SWE create more chances in Nizhny Novgorod and grab the goal to win the game…#SWEKOR pic.twitter.com/oO1OLPucK9

Sweden takes the lead through a well taken penalty by Andreas Granqvist. The penalty was awarded after an on-field review (VAR) by the referee.

And the match is underway, both teams will be looking to get maximum points in a group that has already produced an upset in the 1-0 defeat of defending champions Germany.

It’s a few minutes to kick-off for the Group F match between Sweden and South Korea.

TEAM NEWS // We have the teams for #SWEKOR… ?#WorldCup pic.twitter.com/l6e1oCpBc8

Sweden will be hoping to convincingly and conclusively prove that they are a team that can perform on the big stage without the services of their larger than life star, Zlatan Ibrahimovic.

Ibrahimovic, a controversial figure with the national team, missed the World Cup qualifiers and has said in the build up to the World Cup, that he believes he should have been given the chance to play at the World Cup.

South Korean fans on the other hand will be looking up to Tottenham’s Son Heung-min to help them overcome a tough group that also has the reigning champions Germany and North American side Mexico.

A tapir in the local zoo of Nizhny Novgorod, th city which will host this encounter has predicted that Sweden will edge South Korea, as the tradition of using animals to predict matches continues to thrive at the World Cup.

Today brings action from group where the defending champions Germany have already been stunned by Mexico, losing 1-0 on Sunday.

The other teams in the group, South Korea and Sweden will meet on Monday while Group G will also take to the pitch with matches between highly ranked Belgium against Panama, and England against African side Tunisia lined up.