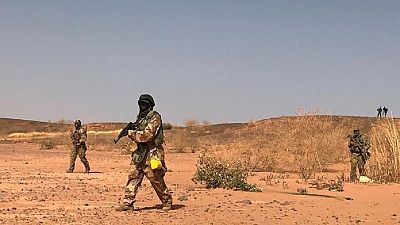 Three suicide bombers killed 10 people at a mosque in Niger’s southeastern city of Diffa who had gathered after breaking the Ramadan fast, an army spokesman said on Tuesday.

The area around Diffa, close to Lake Chad and the borders with Nigeria, Chad and Cameroon, is a stronghold for two factions of militant group Boko Haram, which have been fighting to establish an Islamic state in the region.

“It was last night that these three people exploded their charges during a religious service,” the spokesman said. He later said the three bombers were female.

It was last night that these three people exploded their charges during a religious service.

Southeast Niger has seen sporadic attacks by militants loosely linked to Boko Haram. The Islamist group has gradually split into two factions, one of which has pledged allegiance to Syria-based Islamic State.

Troops from Niger and the United States killed 11 Islamist militants from that Islamic State affiliate in a firefight last December.

Boko Haram sometimes use female suicide bombers in their campaigns against security forces and civilians, in part because they are attract less suspicion.

More than 15,000 people have been killed and millions displaced by the conflict in the Lake Chad region.

After a deadly assault on the Nigerien town of Bosso in June 2016 killed 32 soldiers, Chad sent 2,000 troops to help Niger, but they were withdrawn in October last year.