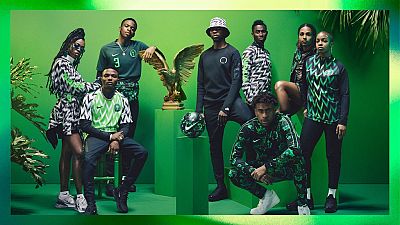 The demand for counterfeit jerseys is set to soar in Nigeria, following Nike’s announcement of a stock out on Friday.

Nigerians in the United Kingdom (UK) and fans of the Super Eagles across the world were left frustrated when the retro-themed kit, voted the ‘best World Cup jersey in a Sky Sports poll, seemed to have sold out a few hours after its official release.

Nike confirmed the depressing news on Twitter, adding that there were no plans for restocking the much sought after kit.

All three Nigeria jerseys have now sold out. There are no current plans for a restock.

‘‘All three Nigeria jerseys have now sold out. There are no current plans for a restock,’‘ the global sportswear brand tweeted.

All three Nigeria jerseys have now sold out on https://t.co/sbOufonoj6. There are no current plans for a restock. | https://t.co/3tfa4y28VH

Long queues of fans had also lined up outside Nike’s physical stores in the UK.

This is the queue at Nike Town for the Nigeria kit launch, literally round the corner… pic.twitter.com/K3vzfL6psR

This is the Nike shop in Lagos. The entire stock of Nigeria World Cup kits is sold out. pic.twitter.com/6S7IVd6WlS

Since its release in February, the kit described as a ‘subtle homage to Nigeria’s ’94 shirt’, received rave reviewers from fans and media alike.

In Nigeria however, there were reports of the jersey being on sale weeks before its June 1 official release.

With a price of tag of $90, which is beyond the reach of millions of fans of the Super Eagles, sellers of bootleg versions which go for as low as $5 in Nigeria, are the clear winners.

The Nigeria Football Federation, which has often complained that counterfeit sales undermine sponsorship deals with partners like Nike, explained that it had received three million pre-orders for this year’s kit.

Nigeria’s team is currently in London, where they will face England in a friendly game at the Wembley on Saturday.

My ‘underdogs’ will surprise the world: Nigeria coach confident ahead of World Cup