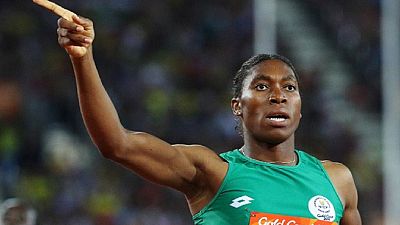 South Africa’s Olympic and world champion Caster Semenya put aside controversy and ran the fastest women’s 800 metres of the year at the Prefontaine Classic Diamond League meeting on Saturday.

Semenya, whose middle-distance running career could be under threat because of a new IAAF hyperandrogenism rule, clocked one minute 55.92 seconds in a dominant performance as she ran the fastest 800m on American soil.

The IAAF rule, which is scheduled to become effective in November, would effectively give her a choice of taking medication to restrict her testosterone level or move to longer distance events.

I just want to inspire people, and inspire the youth, to show them that if you believe, anything was possible.

“I don’t want to talk about it,” the double Olympic champion said when asked about the rule that South Africa may take to the Court of Arbitration for Sport.

Rather than IAAF controversy, Semenya seeks to inspire

But after signing autographs, taking a victory lap to cheers from the sell-out crowd, she said that some day she might like to run a marathon.

“When you live, you gain experience, I’m more mature. I’ve learned about everything, especially in sports,” she added.

“I just want to inspire people, and inspire the youth, to show them that if you believe, anything was possible.”

The triple world champion also said breaking the 800 world record of 1:53.28 set by Czechoslovakia’s Jamila Kratochvilova set in 1983 was on her to-do list.

“That is the plan. Now it is not about running hard, it is running smart,” said the 27-year-old South African, who has a best of 1:55.16. She also quashed any suggestions she could retire soon.

“If (sprinter) Kim Collins can run to age 40, what about me?” said Semenya, who finished ahead of American Ajee Wilson.

‘I have no time for nonsense’: S. Africa’s Semenya responds to new IAAF regulations