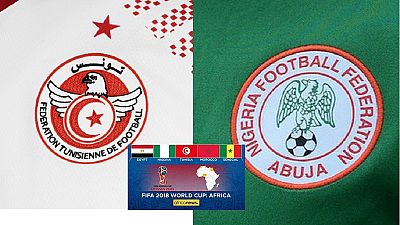 Two African sides heading to the World Cup starting mid-June played warm up fixtures yesterday. Both the Super Eagles of Nigeria and the Desert Foxes of Tunisia settled for draws in their respective games.

Nigeria held at home by DRC

Nigeria conceded a late penalty and were held to a 1-1 draw by the Democratic Republic of Congo in a friendly in Port Harcourt planned to give them a fitting send-off to next month’s tournament in Russia.

Nigeria, who head to Europe to continue their preparations with a game against England on Saturday, took a 15th-minute lead through Dutch-born defender William Troost Ekong.

But they gave away a spot-kick in the 78th minute which striker Ben Malomgo converted for the equaliser. Nigeria will also play a friendly against the Czech Republic before they head to Russia, where they face Croatia, Iceland and Argentina in Group D.

How Tunisia rallied to score twice against Portugal

Portugal’s defensive frailties were again exposed as Tunisia hit back from two goals behind to hold the European champions to a 2-2 draw in a World Cup warm-up on Monday.

Portugal, who rested captain and leading scorer Cristiano Ronaldo after he played in Saturday’s Champions League final for Real Madrid, went ahead through an Andre Silva header from Ricardo Quaresma’s pinpoint cross in the 22nd minute.

Midfielder Joao Mario doubled the lead when he rifled in a shot from outside the penalty area and Portugal, who face Spain, Morocco and Iran in their World Cup group, seemed to be in control.

The cracks began to appear five minutes later, however, when Anice Badri was left alone inside the penalty area to fire past Anthony Lopes and pull one back for Tunisia who face England, Panama and Belgium in their World Cup group.

Portugal’s defence imploded in their previous game, a 3-0 friendly defeat by the Netherlands in March, and gave coach Fernando Santos more cause for concern in the 64th minute.

They failed to properly clear a free kick and when the ball was played back in, Fakhreddine Ben Youssef got between four defenders to slide the ball home with the hosts appealing in vain for offside.