Dozens killed in clashes between Somaliland and Puntland 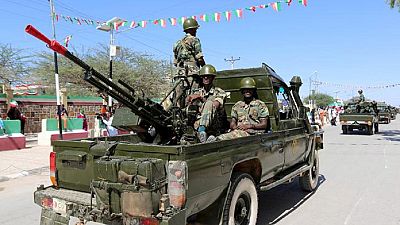 <p>Fighting between Somalia’s semi-autonomous Puntland region and breakaway Somaliland has killed dozens of soldiers, according to a witness and a military commander who spoke of a “hellish” outbreak of violence.</p> <p>The clashes on Thursday morning appeared to be a resumption of more than 10 years of periodic conflict between Puntland and Somaliland over the disputed Sool region.</p> <h3>Puntland blames Somaliland</h3> <p>A presidential statement from Puntland blamed Somaliland for the confrontation, adding that ‘Puntland will defend its land and people’.</p> <p>“Somaliland attacked us and we had to attack Somaliland from other sides,” Abdifatah Saiid, a Puntland military commander, told Reuters late on Thursday.</p> <p>“It was a hellish battle. We killed 30 soldiers from Somaliland … and from our side we lost six soldiers.”</p> <p>A local elder in the area said the fighting broke out on Thursday morning and he counted a total of about 40 dead soldiers on both sides, with residents fleeing the area.</p> <h3><a href="http://www.africanews.com/2018/05/16/somalia-president-wants-end-to-senseless-hostilities-between-puntland-and/"target="_blank"><span class="caps">SUGGESTED</span> <span class="caps">READING</span>:Somalia president wants end to senseless hostilities between regions</a></h3> <p>Puntland said it had captured 11 wounded Somaliland soldiers, according to the military commander. </p> <p>“We shall continue fighting till we reach Las Anod town which is ours but illegally controlled by Somaliland,” he said.</p> <p>Last week, clashes between the two sides over the ownership of Tukaraq village, seized by Somaliland last month, killed at least 45 people.</p> <h3>Somaliland warns Somalia</h3> <p>Somaliland broke away from Somalia in 1991 and operates as an independent state but has not won international recognition.</p> <p>It suggested Puntland was trying to exploit turmoil in the region caused by a <a href="http://www.africanews.com/2018/05/23/storm-kills-dozens-in-somaliland-puntland-and-djibouti/<br /> "target="_blank">tropical cyclone</a> that led to more than 50 deaths, wiped out livestock and destroyed hundreds of farms as heavy rains and floods hit the Horn of Africa.</p> <p>“Somaliland will not endure the constant aggression of Somalia’s federal forces at the border of the two countries,” Abdirahman Abdullahi Farah, Somaliland’s information minister said in the statement.</p> <p>The U.N. Assistance Mission on Somalia and the country’s international partners, which include the United States and the European Union, called on both sides to halt the fighting.</p> <p>Clashes only add to the suffering of people in the area as they deal with an already-difficult humanitarian situation aggravated by tropical cyclone Sagar, a statement by the U.N. mission said.</p>

Clashes only add to the suffering of people in the area as they deal with an already-difficult humanitarian situation aggravated by tropical cyclone Sagar.