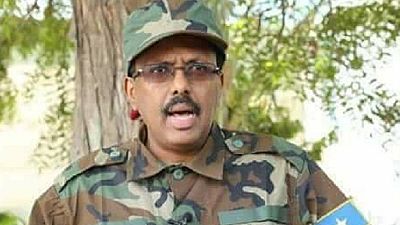 <p>President of Somalia, Mohamed Abdullahi Farmajo, has waded into an inter-regional confrontation between Puntland and semi-autonomous Somaliland regions in the country.</p> <p>Reports over the past few days indicate that troops belonging to the regions have clashed in Tuka-raq village in Sool region.</p> <p>A statement from the presidency, Villa Somalia, late Tuesday read in part: “The hostilities in Tuka-raq must cease immediately, it has already caused death and damage, it is senseless and must stop.”</p> <blockquote class="twitter-tweet" data-conversation="none" data-lang="en"><p lang="en" dir="ltr">President <a href="https://twitter.com/M_Farmaajo?ref_src=twsrc%5Etfw"><code>M_Farmaajo</a> calls for immediate end to hostilities in Tukaraq between Somaliland and Puntland. <a href="https://twitter.com/hashtag/Somalia?src=hash&ref_src=twsrc%5Etfw">#Somalia</a> <a href="https://t.co/n4Pxd4Hq37">pic.twitter.com/n4Pxd4Hq37</a></p>&mdash; Harun Maruf (</code>HarunMaruf) <a href="https://twitter.com/HarunMaruf/status/996509628287606790?ref_src=twsrc%5Etfw">May 15, 2018</a></blockquote> <script async src="https://platform.twitter.com/widgets.js" charset="utf-8"></script> <p>The president enjoined the leaders and elders to negotiate for peace and agreeable coexistence. He also deplored deadly violence in other parts of the restive country.</p> <p>According to a <span class="caps">VOA</span> journalist who extensively covers Somalia and the Horn of Africa, Harun Maruf, full-scale fighting had taken place between the respective forces with each side accusing the other of starting the clashes.</p> <p>He cited a source that confirmed that there were casualties on both sides. The United States has also called on the factions to amicably resolve their differences.</p> <blockquote class="twitter-tweet" data-lang="en"><p lang="en" dir="ltr">Intermittent artillery fire reported at the frontline b/w Somaliland and Puntland forces in Tukaraq village area a day after heavy fighting which resulted about a dozen soldiers dead, and many others injured. Sources say neither side made territorial gains despite rival claims.</p>— Harun Maruf (@HarunMaruf) <a href="https://twitter.com/HarunMaruf/status/996686212852338688?ref_src=twsrc%5Etfw">May 16, 2018</a></blockquote> <script async src="https://platform.twitter.com/widgets.js" charset="utf-8"></script>