A massive hydropower station under construction by a Chinese company in Zambia has created nearly 10,000 jobs for low-income locals and promises to ease severe power shortage in the underdeveloped southern African country.

Even though endowed with abundant water resources, poor infrastructure has hindered the landlocked country from turning its natural advantage into stable energy source.

Since the beginning of construction, Kafue Gorge Lower Hydropower Station has created nearly 10,000 jobs for Zambia.

The arrival of a Chinese company, however, brought new hopes to people in the country.

The hydropower station, the biggest of its kind in 40 years,it has an installed capacity of 750 megawatts and is expected to increase Zambia’s power supply by 38 percent, which is sufficient to meet the country’s electricity demand for the next five to 10 years upon its completion in 2020.

Since the start of its construction in 2015, the project has greatly benefited the local economy by creating jobs for those under-paid.

It currently employs more than 3,500 local workers.
Zilla used to be a long-distance truck drive for a South African company and now works as a drive for the Chinese company.

Zilla has witnessed a tremendous change brought by the project to locals and even people from other parts of the country.

“Because not only the locals are benefiting from the same region. Even from other provinces, other towns, outskirts of Lusaka, even the copper belts, they are also being employed here,” said Zilla.

Zilla and many of his colleagues have seen their wages jump nearly seven times since joining the Chinese company.

Higher income helps improve their living standard, with Zilla, for instance, finally able to build a new house he had dreamt of for so long. 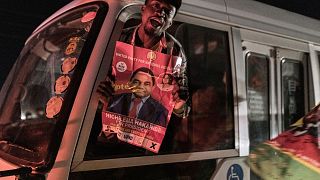