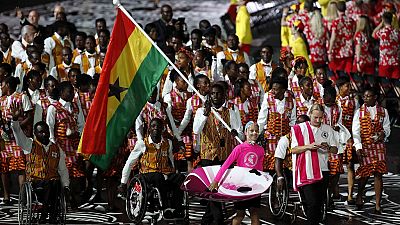 Ghana’s president Nana Addo Dankkwa Akufo-Addo has suspended a deputy minister and another top official of the sports regulatory body over a visa scandal that saw sixty (60) fake journalists fly to Australia to ‘cover’ the Commonwealth Games.

A statement from the presidency read: “The President of the Republic, Nana Addo Dankkwa Akufo-Addo, on Thursday, 12th April 2018, suspended from office, Pius Enam Hadzide; and the acting Director General of the National Sports Council, Hon. Robert Sarfo Mensah.

“This decision has been taken following preliminary investigations conducted into the circumstance that led to the arrest of some sixty (60) Ghanaians, who had allegedly attempted to enter Australia by false pretences, in the on-going 21st Commonwealth Games.”

The sixty were found to be fake journalists after the Australian authorities reportedly asked them basic sports questions but they failed. They are believed to have gotten visas through illegal connections with the help of people in high authority.

The president has also directed that other top officials be recalled from the Games to assist the police Criminal Investigations Department (CID) into the matter.

Ghana’s situation was detected before the Games but other African countries are making the headlines for all the wrong reasons in the area of disappearing athletes. Cameroon have recorded eight such cases whiles five others from Rwanda, Sierra Leone and Uganda have joined the list.