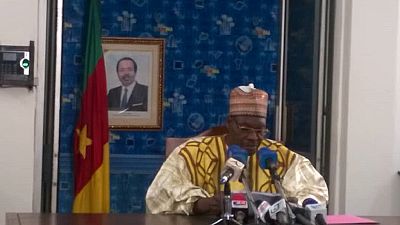 The Cameroon government has finally broken its silence on the state of separatists deported from Nigeria in early January 2018.

In an interview with the RFI English service, Information Minister Issa Tchiroma Bakary, said all the detainees were in good health and being treated in accordance with the law.

He said three months on, investigations were ongoing to ascertain which charges were going to be leveled against them. He also stressed that they were enjoying all constitutional rights and would most likely be tried in a military tribunal.

They’re engineering, they’re masterminding all what is taking place in the country – assassinations, burning public institutions – you cannot imagine the kind of ordeal our population are submitted to in the northwest and southwest, and they are at the helm.

“Which means that in case any need be, as far as the health is concerned, they receive all doctors or anyone who is capable of addressing the problem that they are confronted with.

“But I would like to emphasize the fact that whatever is taking place right now is being done in accordance with our law and penal court procedure,” the Minister said.

Supporters of the detained separatists hold that their lawyers have not been given access to their clients, the Minister addresses that point by saying that whatever processes are ongoing are within the laws of the country.

He accused the detainees of being the brain behind all the chaos that has rocked the Anglophone regions of the country. “They’re engineering, they’re masterminding all what is taking place in the country – assassinations, burning public institutions – you cannot imagine the kind of ordeal our population are submitted to in the northwest and southwest, and they are at the helm,” said Bakary.

“The likelihood that they will be court marshaled is obvious, because as I told you many people have been killed are being killed. Many people have already been slaughtered … the judiciary system will charge,” he added.

The group of over 40 detainees include the known leader of the so called interim government of Ambazonia, Sissuku Ayuk Tabe. Their extradition was criticised by the United Nation who called out Nigeria for breaching international law.

The secessionists declared an independent state called Ambazonia Republic on Oct. 1, 2017. Since then, violent scenes that have resulted in loss of lives for both the secessionists and government forces have played out in the Northwest and Southwest regions.

The crisis which has attracted considerable international attention has become the gravest challenge yet to President Paul Biya, who is set to seek a renewal of his 35-years in power in an election slated for later this year.