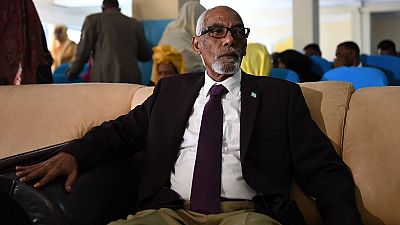 The Somali army chief General Abdiweli Jama Gorod says a group of soldiers who entered parliament today with weapons has been “detained”.

Voice of America journalist, Harun Maruf, said on Twitter that about 45 soldiers had been arrested, according to a security source.

The detention is a climax to a dramatic day at the country’s parliament as the standoff between supporters of the speaker on one hand and those of the Prime Minister, Ali Hassan Khaire, continues.

How can I take over, I’ve 11 bodyguards...that is like saying president took over the Presidential Palace

Speaker Mohamed Osman Jawari has been accused by elected officials of abuse of power and obstruction of constitutional reform. He has, however, survived a motion of no-confidence.

Today’s parliamentary debate over the matter was cut short when lawmakers accused the speaker of violating security procedures of the house by bringing armed guards with him into the parliament.

The speaker denied the allegations, saying he only took his bodyguards into the parliament.

“How can I take over, I’ve 11 bodyguards…that is like saying president took over the Presidential Palace,” Jawari said.

BREAKING: Somali army chief Gen Abdiweli Jama Gorod says a group of soldiers who entered parliament today w/ weapons has been “detained”. According to a security source, about 45 soldiers were arrested. Earlier Speaker Jawari said he only took his bodyguards into the parliament.

At the height of the standoff, the African Union Mission in Somalia (AMISOM) offered to take over the security of the parliament until it’s secured and MPs can sit in an atmosphere where there is no intimidation.

‘‘One option is that legislators accept with the executive that AMISOM takes charge of parliament’s security, or seek a neutral ground or in a worst case scenario, AMISOM pulls out and leaves the lawmakers to themselves,’‘ Brig Lokech said.

Amisom commander gives 3 options both the Executive and the Legislature

1 Accept with the executive that #Amisom takes charge of the parliament so MP’s can freely debate.
2 Look for a neutral ground (Another place)
3 Amisom to pull out & leave the MP’s to sort out their problems pic.twitter.com/ZszTNaePDE

Politicians have bemoaned the negative effect of the crisis on the country.

The Upper House of Parliament has tried to mediate in the impasse, the biggest political crisis since the government took office a little over a year ago. President Farmaajo has had to postpone several meetings and foreign travels to try and end this crisis.

The African Union, United Nations and other partners have voiced grave concern and also called for calm.