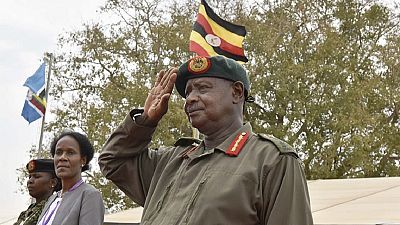 The Ugandan army is to embark on a registration process of all crime preventers in the country.

The registration follows President Yoweri Museveni’s announcement this week that the crime preventers would be recognised as a reserve force of the national army, the Uganda People’s Defence Forces.

‘‘Crime preventers will maintain their duties as they are now regarded as a Reserve Army of the Uganda People’s Defence Forces (UPDF).’‘

Crime preventers will maintain their duties as they are now regarded as a Reserve Army of the Uganda People’s Defence Forces (UPDF).

I salute Gen. Kale Kayihura for diligently implementing the crime preventers programme and overseeing it to its fruition.
Crime preventers will maintain their duties as they are now regarded as a Reserve Army of the Uganda People’s Defence Forces (UPDF). pic.twitter.com/cFGgQvKE5z

Who are crime preventers?

Crime preventers are a controversial subject in Uganda: where the police led by former police chief Kale Kayihura saw them as effective agents in implementing community policing, their critics describe them as criminals who destabilised established police structures and openly worked for the ruling party in the 2016 elections.

The National Crime Preventers Forum (NCPF) describes itself as an umbrella body under which all crime preventers are organised and coordinated. It was founded in 2013 to promote community policing in Uganda in partnership with Uganda Police Force.

The NCPF boss, Blaise Kamugisha, says there are 11 million crime preventers in the country, while the national army has about 45,000 active personnel.

Local news portal ChimpReports talked to the UPDF Spokesperson Brig Richard Karemire, who revealed that the army will ‘identify, register and document all the crime preventers’.

‘‘We have to know who they are so we can call them in times of need. We intend to take advantage of the skills they have for the benefit of the country,” Brig Karemire said.

He also clarified that the UPDF Act allows trained militants such as Local Defence Units to serve under the Reserve Force.

Following Kayihura’s sacking, the future of the crime preventers hang in balance and local media reported that the new inspector general of police, Martin Okoth – Ochola was considering their fate before Museveni intervened.