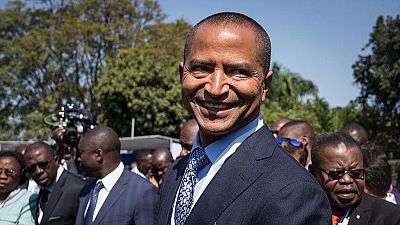 <p><strong>Democratic Republic of Congo’s attorney general said he has opened an investigation into reports that the opposition leader Moise Katumbi held Italian nationality as recently as 2017, which may disqualify him from presidential election due in December.</strong></p> <p>Katumbi, seen as the leading opposition candidate to replace President Joseph Kabila in the vote, has been in exile since May 2016 after being accused by state prosecutors of hiring mercenaries. But he said earlier this month he would return home <a href="http://www.africanews.com/2018/03/13/fearless-katumbi-announces-july-return-date-to-contest-dr-congo-presidency/">by June</a> to lodge his candidacy.</p> <p>Paris-based magazine Jeune Afrique last week cited the administrative services of the town of San Vito dei Normanni in southern Italy as saying that Katumbi held Italian citizenship from October 2000 until January 2017, according to the town’s civil registry.</p> <p>Under Congo’s constitution, Congolese citizens cannot hold dual nationality, although the provision is laxly enforced and many prominent politicians are believed to have foreign citizenship.</p> <p>“We have just opened a judicial investigation into Moise Katumbi so that, at the appropriate time, he can respond for his acts,” Attorney General Flory Numbi told U.N.-sponsored Radio Okapi in an interview that has yet to air. An extract of the interview was provided to Reuters by Numbi’s office.</p> <p>“All this time he was leading the province, he was committing false acts, (using) false documents,” said Numbi, referring to Katumbi’s tenure as governor of mineral-rich Katanga province from 2007-2015.</p> <p>Officials from San Vito dei Normanni and Katumbi’s spokesman did not immediately respond to requests for comment.</p> <p>Katumbi has repeatedly said the government is fabricating accusations against him to derail his candidacy.</p> <p>President Joseph Kabila, in power since 2001, is barred by term limits from standing for re-election in December. But opponents suspect he intends to try to change the constitution to run again or further delay the poll, which was originally due in 2016.</p> <p>Kabila has refused to publicly commit to not standing again and blamed election delays on a slow voter registration process.</p> <p>Uncertainty about his intentions has sparked street protests in which security forces have killed dozens of demonstrators and raised fears Congo could slide back into civil war.</p> <p>Katumbi, a millionaire businessman and owner of TP Mazembe, one of Africa’s most successful soccer teams, was a longtime ally of Kabila but fell out with him in 2015 before announcing his candidacy for president.</p> <p>He has since been dogged by legal woes and was sentenced in June 2016 to three years in prison for real estate fraud. He says the accusations against him are politically motivated.</p> <p><strong><em><span class="caps">REUTERS</span></em></strong></p>

We have just opened a judicial investigation into Moise Katumbi so that, at the appropriate time, he can respond for his acts.