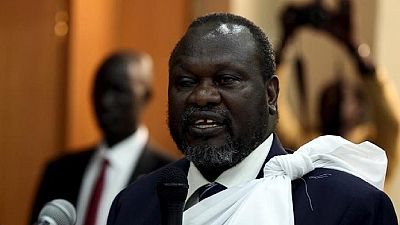 Rebel leader Machar is a de facto prisoner in a farmhouse outside of Johannesburg. He is isolated from his friends and family, and has been frozen out of South Sudan’s peace process.

The IGAD’s communique issued following its 61st Extra-Ordinary Session held on Monday in Addis Ababa, said it would release Dr. Machar as soon as possible if he would agree to renounce violence, not obstruct the peace process and relocate to any country “outside the region not neighboring South Sudan.’‘

If you read it carefully, actually, there is no lifting of any house arrest.

“If you read it carefully, actually, there is no lifting of any house arrest. Because what they said is very clear that they will transfer him from where he is now, which is South Africa, to another location that is not in the region, and that would not be in any proximity with South Sudan,’‘ Angelina Teny, Machar’s wife said, who is also a senior opposition member.

Can Machar and Kiir work together again?

Dr Machar returned to Juba in April 2016 and formed a transitional government with President Salva Kiir and other groups according to 2015 peace agreement.

However, fresh fighting broke out in Juba in July 2016 and Dr Machar had to flee to the Democratic Republic of Congo, from where he was airlifted to Khartoum.

The opposition groups say they are upset by the government demand to exclude Machar from the SPLM reunification process, peace revitalization forum, and the national transitional government.

President Kiir government made it clear that Machar can only run for president at the end constitutional process, insisting that he would sabotage the peace process if allowed to participate.

However, the observers said this new condition may obstruct the peace process as the third round of revitalization process is at doorstep.

Machar, who has long dominated South Sudanese politics, though he was rebelled against former SPLM leader Dr. John Garang De Mabior, was an instrumental figure in South Sudan’s fight for independence from Sudan, and has served as vice president twice in the very short history of the world’s newest nation.