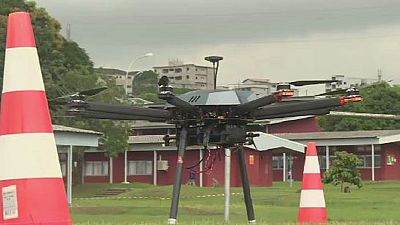 This is by the use of Unmanned Aerial Vehicles (UAVs) commonly known as drones spearheaded by the national electricity company (CIE), a subsidiary of the Franco-African group Eranove which has opened a drone academy in Abidjan

“Currently we have about 25,000 km of high voltage lines, we have a lot of problems with the vegetation, so we have to control it all the time and it’s very very hard because it’s really spread all over the country. So at the vegetation level, at the equipment level, so we will use a kind of artificial intelligence that will automatically analyze the images to detect every conceivable possible defect, a rusty bolt, a broken cable,” said Benjamin Mathon a trainer at the academy.

The aim is to train about twenty local pilots to inspect its power lines for the 1.3 million Ivorian subscribers and power exports to neighbouring countries such as; Ghana, Togo, Benin, Burkina Faso, Mali and Liberia.

“UAVs will allow us to inspect our structures, ensure their safety in a much finer way than in the past and also optimize our monitoring and inspection costs. This is very important for us but also the school will open up to the outside world because we work for ourselves but we think of others,” said Dominique Kakou director general at CIE

The drones are equipped with cameras sensors and thermal lasers will collect data which artificial intelligence software automatically analyzes to detect any faults. The trainees are not only shown how to assemble, fly and repair the drones, but also learn numerous software packages for image data analysis, geo-location and mapping.

For students like Noursely Doumbia, this is an exciting venture.

“I really enjoyed this training, already with everything we learned about software and how to fly the drones.. It’s really something extraordinary…” he added.

The advantage of the drone academy is that it is open to all companies in the west Africa region including those in the agro-industry and mining sectors.

Ivory coast has heavily invested in rebuilding its power grid since the end of civil war in 2011 and a authorities plan to invest another 16 billion euros in the sector by 2030.