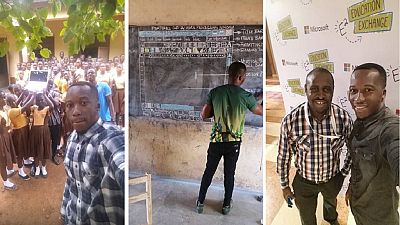 Owura Kwadwo Hottish, the Information and Communication Technology (ICT) teacher in Ghana who became a twitter sensation in February after drawing Microsoft Word interface on a blackboard continues to get support.

Hottish’s innovative teaching method in the face of lacking teaching and learning materials earned him lots of commendation on social media.

Microsoft’s Africa office also promised to equip him with a device to help teach his children. This was after a tech entrepreneur Rebecca Enonchong tweeted at the company seeking support for him.

Hottish shared a photo of his arrival in Singapore for a computer program. “Just arrived in Singapore for the Microsoft Global Education Exchange Summit. Looking forward to learn something new,” he captioned a picture with a Kenyan colleague.

Ahead of the Microsoft-sponsored Singapore trip, he had received material support of a laptop and desktop computer to support his efforts. The laptop he said was from a benefactor at University of Leeds, one Amiraj Alharthi.

The desktop computer on the other hand was donated through the efforts of a local journalist with support from a local computing firm, NIIT. In both cases, the donations were made at the premises of the school located in Ghana’s Ashanti region.

Second donation received. Thanks to Ohemeng TAWIAH and NIIT.
God bless you all. pic.twitter.com/2o100xcvd9

Owura Kwadwo a professional teacher with the Ghana Education Service (GES) posted photos of him having to draw a word processing window on the board for his pupils. According to him, it was funny but that was his own way of ensuring that his pupils understand what he is teaching.

He earned social media praise more on Twitter, where people continue to “retweet” and “like” his photos. Most media outlets around the world have also carried his story following the social media blitz.