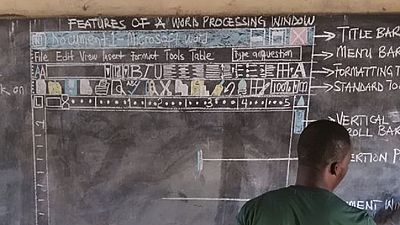 An Information and Communication Technology (ICT) teacher in Ghana decided to be innovative in the face of lacking teaching and learning materials.

Little did Owura Kwadwo Hottish know that his exploits will attract the attention of no mean a group as Microsoft. The group’s Africa office have promised to equip him with a device to teach his children.

But how did Microsoft get to know about his ingenuity and enterprise? Thanks to social media platform Twitter. A tech entrepreneur Rebecca Enonchong earlier tweeted a photo of Owura Kwadwo drawing a word interface on a board for his kids.

This picture has been circulating on web. Does anyone know what country? This teacher is my hero. I want to find him. #TeachingIsAVocation pic.twitter.com/k7d0ysKrDj

Next, she tweeted at Microsoft Africa with a request that they support the efforts of the teacher in her words with “some proper resources.”

Hey MicrosoftAfrica, he’s teaching MS Word on a blackboard. Surely you can get him some proper resources. https://t.co/u8N3eXguXS

Two days later, Microsoft Africa responded to her tweet with the promise to equip Owura Kwadwo with a device from one of their partners.

They also added that he will be granted access to their MCE (Microsoft Certified Educator) program and free professional development resources.

Supporting teachers to enable digital transformation in education is at the core of what we do. We will equip Owura Kwadwo with a device from one of our partners, and access to our MCE program & free professional development resources on https://t.co/dJ6loRUOdg

A grateful Rebecca like Oliver Twist will ask Microsoft for more in another tweet which read: “Yes!! @microsoft coming through for our heroic teacher. Thanks for doing this! He deserves all our support.

“Can we do something for his students too?” the request has yet to attract any response. Meanwhile people are waiting to see photos of the teacher with the Microsoft tool teaching his pupils in Ghana’s Ashanti region.

Owura Kwadwo a professional teacher with the Ghana Education Service (GES) posted photos of him having to draw a word processing window on the board for his pupils. According to him, it was funny but that was his own way of ensuring that his pupils understand what he is teaching.

He has earned social media praise more on Twitter, where people continue to “retweet” and “like” his photos. Most media outlets have also carried his story following the social media blitz.