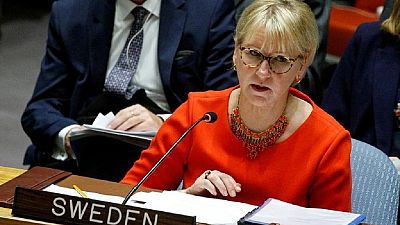 Sweden says it is concerned about Ethiopia’s reinstatement of a state of emergency (SOE) in the midst of reform efforts initiated by government.

Swedish Foreign Affairs Minister, Margot Wallstrom, in a tweet said as an ally, Sweden was ‘following development in Ethiopia closely.’

Continued reform efforts, inclusive dialogue, respect for rule of law and human rights, including freedom of expression should be a priority, her tweet further tasked the government.

Following development in Ethiopia closely. As a long-time partner, Swe is concerned about reinstatement of the SoE. Continued reform efforts, inclusive dialogue, respect for rule of law and human rights, including freedom of expression should be a priority.

The February 16 state of emergency was imposed after a meeting of Council of Ministers supposedly to curb spreading violence across the country. It is the second such measure in the last two years.

The country spent the the first eight months of 2017 under a SOE imposed in October 2016. The recent measure was declared barely 24 hours after PM Hailemariam Desalegn resigned his post. The ruling coalition is set to name his successor at a Congress.

Most western allies including the United States, the United Kingdom and Germany have all spoken on the move, tasking the government to soldier on with political reforms and respect for the rights of opponents.