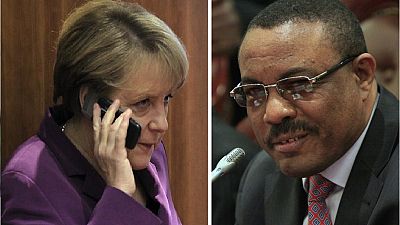 The German government has urged Ethiopia to widen the democratic space in the country whiles noting some level of implementation of recently announced political reforms.

Germany, an ally of the East African economic giant, also tasked Addis Ababa to do more in the area of releasing other prisoners, spokesperson for the German government, Stephan Seibert said on Monday.

Seibert said Germany made its views known in a phone call between Chancellor Angela Merkel and her Ethiopian counterpart Prime Minister Hailemariam Desalegn.

“During the conversation, they discussed political developments in the country, among others. The Chancellor welcomed that the Ethiopian government released a larger number of people, who were arrested for political reasons, since the beginning of this year.

“She encouraged the Premier to take further steps in widening the democratic space in the country, including further releases of prisoners,” the German Embassy in Addis Ababa wrote on its Facebook wall.

Its ambassador, Madam Wagener, in January 2018 had met with top opposition leader Merera Gudina during which time the embassy said both parties had fruitful discussions over political developments in Ethiopia.

Gudina had just been released after over 400 days in detention. The government dropped a multiple criminal charge against him. He was arrested in December 2016 after returning from an European tour.

Several of Ethiopia’s allies and the United Nations have stressed the need for Addis Ababa to open up the political space and to also improve its human rights record. Rights groups have repeatedly slammed the government for stifling dissent and muzzling opponents.