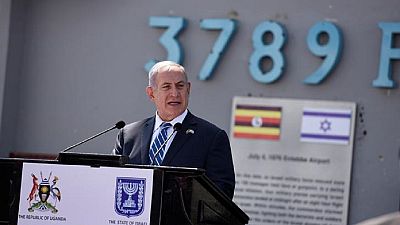 Uganda has denied partnering with Israel to host thousands of African migrants who have been ordered to leave the Middle East country within 90 days.

The denial comes hardly a day after media reports that Israel government has issued a notice for thousands of African migrants to leave the country or face imprisonment.

The reports say the migrants who are mostly from Eritrea and Sudan will be given the option of going to their respective home countries, to Uganda or to Rwanda.

Uganda’s foreign minister, Henry Oryem Okello, says he is “baffled” by the reports.

“We have no agreement with the Israeli government to send refugees from other countries that are in Israel to Uganda,” said Henry Oryem Okello, the State Minister in charge of International Affairs.

Henry Oryem Okello told a local Ugandan news agency, Daily Monitor that no such deal had been reached with Israel, which is ordering Africans it labels “infiltrators” – meaning those who did not enter the country through an official border crossing – to leave within 90 days.

“We have no partnership agreement with the government of Israel, ask them (Israel) to explain how they reached that decision,” the minister said.

Many of the migrants facing expulsion come from Eritrea and Sudan, and say they are unable to return as they came to Israel to seek asylum after fleeing persecution and conflict.

Dr Livingstone Sewanyana, a human rights activist in Uganda says that repatriation of refugees is only acceptable if they would not suffer the same or similar harassment or mistreatment they are fleeing from.

Wile Uganda would be in fulfilment of her international obligations if it offers protection to the refugees.

“If they (refugees) do not render host communities in a condition of competition over land and other resources, there would be no problem. But if they create unnecessary competition, it would be advisable that Uganda does not render her borders unnecessarily open,” Dr Sewanyana said.