Togo govt hit with fresh round of opposition protests 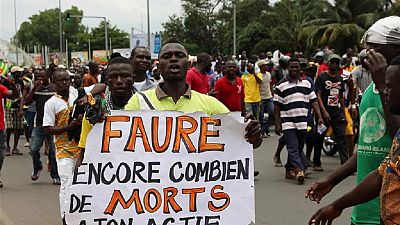 A fresh round of protests kicked off in Togo on Wednesday as opposition supporters hit the streets with anti-government demonstrations in the capital Lome and other towns.

A 14-member opposition coalition in the West African country continues its demands for the resignation of the incumbent president Faure Gnassingbe.

Hundreds of people wearing red head bands and carrying placards marched the streets in a largely peaceful process according to local media reports. Previous instances have been met with tear gas and live bullets from security forces.

The latest protests are expected to be held till the end of the year. The opposition are also calling for other constitutional reforms and a return to the 1992 constitution which caps presidential term limits.

Turn out today was massive as usual in #Lome , #Togo. We simply want the resignation of dictator FEGnassingbe . Something unusual happened today tho: the people refused to rally at the beach as instructed by the government. They want to march on state institutions. #Togodebout pic.twitter.com/NDLLWh6sot

He has openly called for dialogue to end the political impasse that started in August this year. A number of deaths have since resulted and scores arrested. The government at a point cut internet access, banned and unbanned protests and also called for a vote on constitutional reforms.

The vote failed due to an opposition boycott. The next leg is a planned referendum for the citizens to decide on the reforms. In respect of presidential limits, the proposal will not take retroactive effect meaning Faure could contest in two more polls.