Turning poop into power in Kenya 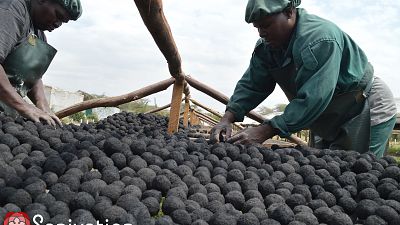 Millions of Kenyans, without toilets in their homes, are forced to endure their neighbours’ unsavoury smells and habits in a shared pit in the ground or nearby fields.

Worse still, they spread germs that cause diarrhoea – one of the leading killers of children under five in Kenya.

“This is the 21st century and we are unable to create decent sanitation solutions – why is that?” said Andrew Foote, the 29-year-old founder of Sanivation, a socially-motivated business that is turning poop into profit.

“As a global community that’s embarrassing,” he told the Thomson Reuters Foundation.

Only three in 10 Kenyans have access to a decent toilet, according to the charity WaterAid, with the remainder dumping their faeces in drains or rivers, or burying it.

Some 5,000 children in Kenya die every year from diarrhoea caused by dirty water and poor sanitation, and lack of sanitation accessories like work boots has also accentuated the situation for working adults.

Sanivation installs “blue box” plastic toilet containers in customers’ homes for free, and then charges a monthly fee of 700 Kenya shillings ($A8.89) to collect the waste, which it turns into odourless charcoal.

The idea is not new, said Foote, pointing to the fact that cow dung has been used as fuel in India for years.

Sanivation removes the waste from the free-standing toilets, heats it to kill dangerous bacteria and turns it into charcoal balls, sold in supermarkets under the brand Eco Flame.

This means less trees are felled to cook food for Kenya’s 44 million people, who are rapidly depleting its forests by illegal settlements, logging and charcoal production.

Eight out of 10 urban homes use charcoal, according to Kenya Forest Service.

Sanivation provides toilets to 800 households in Naivasha, some 100 kilometres north of the capital, Nairobi.

Most customers are tenants who live in one room and now have their own toilet curtained off in a corner, rather than sharing one pit latrine with about 20 other families, said Sanivation’s business manager Tyler Karahalios.

“We’re in the middle of the rainy season and a lot of these pit latrines will overflow,” she said.

Customers prefer the privacy of having their own toilet, which they can keep clean, and feel safer not having to venture into the dark to use public latrines at night, she said.

Sanivation is part of the growing circular economy, where resources, like human waste, are re-used to make money and create jobs, instead of being discarded.

Such low-cost solutions are often more practical than building sewer systems, said the Toilet Board Coalition, a group of charities and businesses working towards the United Nations goal of sanitation for all by 2030.

Only 15 per cent of Kenya is connected to sewerage mains and the figure is declining as population growth is not being matched by investment in sewerage, according to Kenya’s Water Services Regulatory Board.

Foote is keen to show governments that poo can be profitable. Sanivation has partnered with the Naivasha Water Sewerage and Sanitation Company to build a factory that can process 100 tons of waste into 100 tons of charcoal per month.

“People get a little squeamish when they talk about sanitation and poop,” he said.

“The more we can convince governments they should be prioritising sanitation in their budgets, the more likely it is we’ll see services going to the people that need them.”