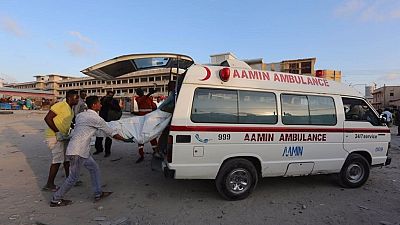 Somalis are seeking support for the capital’s only free ambulance service, Aamin Ambulance, which has offered first aid to bombing victims for over a decade.

The call started after Saturday’s twin bomb blast which is described as the single deadliest attack ever in the Horn of Africa nation.

The attack in Mogadishu has claimed the lives of over 300 people and hundreds more injured, the director of Aamin Ambulance Abdikadir Abdirahman said on Monday.

The private ambulance service is the first in the capital and always the first at the scene of bomb blasts which are frequent in the country.

Please support the unsung heroes and heroines of Aamin Ambulance.

The director of AaminAmbulance services said they had carried an unknown number of dead and injured. #Somalia pic.twitter.com/1UM9bKvu0p

They own a fleet of 10 ambulances which is the largest in the country and they have a team of volunteers who respond quickly to emergencies.

Since the attack on Saturday, their ambulances have been carrying the dead and injured to hospitals and the airport, where a Turkish military plane is airlifting severely wounded victims for treatment.

We offered 4 ambulance vehicles to transport most heavily wounded people to the Airport, whereby the Turkish Military Plane will take them. pic.twitter.com/9VDKs4JcAq

#UPDATE Turkish military air ambulance lands in Mogadishu airport as to airlift the injured in Saturday’s bombing in Mogadishu for treatment pic.twitter.com/gUXDAee769

As Mogadishu residents demonstrated against al Shabaab on Sunday demanding for peace, other Somalis online and in the diaspora were contributing to the cause of the Aamin Ambulance service.

Abdi Addow Nabadoone, a Somali based in Stockholm, Sweden started a gofundme page with the goal of raising a 100,000 Swedish Krona (US $12,286) to support Aamin Ambulance.

“Please support the unsung heroes and heroines of Aamin Ambulance,” he appealed on the page.

Aamin Ambulance works in partnership with the Somali federal Government, UNOCHA, UNDP and WHO.