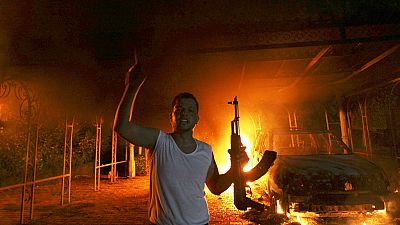 A Libyan militant Ahmed Abu Khattala accused of leading on September 11, 2012, attack on an American diplomatic compound in Benghazi that left the US ambassador and three others dead will go on trial Monday in Washington.

Khattala is charged with 18 counts of murder, supporting terrorists and related charges in the trial in the federal district court in Washington, three years after he was captured in a commando raid and sent by ship to the United States.

Khattala, about 46, was the commander of an Islamist militia in Benghazi, Ansar al-Sharia, which undertook the deadly raid on the US compound in the eastern port city.

The indictment indicates that he led a group of about 20 militants storming the compound. They set buildings on fire, including one that contained ambassador Christopher Stevens and a foreign service officer, killing them.

They also killed two US security contractors shortly afterward in an attack on a CIA outpost near the mission compound.

The attack shocked Americans but turned into a bitter political fight in which Republicans sought in a multi-year investigation to pin the blame for the popular diplomat’s death on then-Secretary of State Hillary Clinton ahead of her planned run for the presidency.

The trial of Khattala, who has pleaded not guilty, was stalled by a steady stream of motions challenging the way he was brought to the United States and the use of evidence from two interrogations.