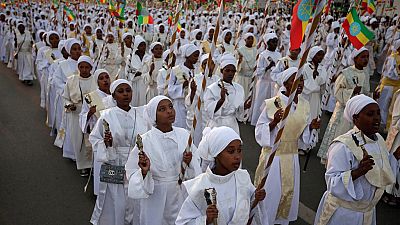 Ethiopian Orthodox Christians celebrated the Meskel festival on Wednesday to commemorate the fourth century discovery by Roman Empress Saint Helena (Queen Eleni) of the True Cross on which Jesus Christ was crucified.

The festival, also celebrated by Eritrean Orthodox churches, is marked by the burning of a large bonfire and a procession (Demera) which saw tens of thousands of Christians and tourists gather at the Meskel Square on Tuesday in the capital Addis Ababa.

The festival falls on September 27 or September 28 in a leap year. The procession is either held on the evening before the festival or on the day itself.

Ethiopia held the procession on Tuesday with participants including priests and students dressed in long white religious robes and head gears sang spiritual songs and circle the bonfire which is fuelled by firewood decorated with daisies prior to the celebration.

Little processions are also held at homes and rain is expected at the end of the event to put out the fire. If the rain falls, the year is expected to be prosperous.

Ashes from the remains of the fire is collected the next day and used to mark the foreheads of faithful with the sign of the cross.

A feast is held afterwards.

It was also held successfully in Eritrea’s capital Asmara and other parts of the country.