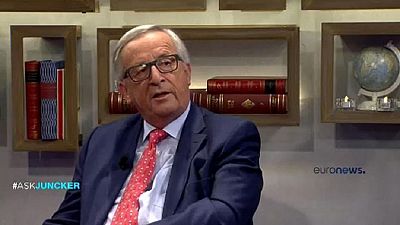 The European Commission President Jean-Claude Juncker says Africans are not showing the real desire to leave the CFA franc zone which consists of 14 countries in Africa who use the two CFA franc currencies.

Juncker made the remark on Thursday in response to a question about the agitations of some Africans against the currency, which was posed by a social media user Abdel en Vrai during a special interview on Euronews on his State of the Union speech.

“I don’t see a real desire of Africans to leave this zone which gives a certain degree of visibility to Africa. Something that i am not particularly keen about is to give young African people the impression that Europe or France is imposing its currency in Africa,” he said.

“I will like to see more emancipation in Africa. We have regular meetings with the concerned countries in order to evaluate the scope of the problems which are faced in the franc zone,” he added.

I don't see a real desire of Africans to leave this zone which gives a certain degree of visibility to Africa ... I am wondering, if all the countries have their own currency, will it be a better situation?

Abdel en Vrai drew his mind to the fact that the governments like the CFA franc but millions of Africans are against the currency. He also asked him what he will do if he had the power to get rid of it.

“I am interested in the views of the young African people here and their desire to liberate themselves … I am wondering, if all the countries have their own currency, will it be a better situation?” Jean-Claude Juncker answered.

On the migrant situation, Juncker said Europe has to invest in Africa if they want Africans to stay in their continent.

“You have to know that Africans are 1.2 billion people and in some decades from now we will have 2.5 billion. We have to be there when it comes to internal solidarity in Africa,” he said.

The 14 African countries using the CFA franc are affiliated with one of two monetary unions.

The CFA franc was originally created in 1939 as the currency of the French colonies in Africa. It went through several transformations and some countries like Guinea left the zone.

The currency has been criticized by some Africans for its dependence on the Euro and the command France has over it.

A French activist of Benin origin Kemi Seba was recently expelled from Senegal where he burned 5,000 CFA franc notes in protest against the currency and French-Africa relations.

He and other activists are calling for the CFA franc to be abolished because they believe it is a symbol of French imposition of power in Africa.