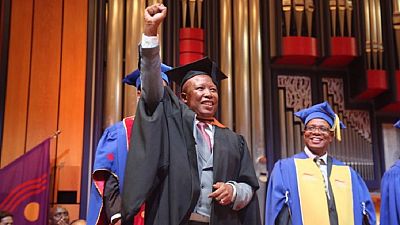 South African opposition firebrand Julius Malema has been awarded a Bachelor of Arts Honours degree in Philosophy by the University of South Africa (UNISA) in Pretoria.

This is his second first degree after graduating from the same university last year with a Bachelor of Arts degree in Communications and African languages.

The 36-year-old leader of the Economic Freedom Fighters (EFF) party and a Member of Parliament said it was a challenge especially marrying his political life with academics.

“It is possible when there is an interest. All of us pretend not to have time but in reality we have a lot of time, we just have to create it and reprioritise our own things,” he was quoted by local media News24.

It is possible when there is an interest. All of us pretend not to have time but in reality we have a lot of time, we just have to create it and reprioritise our own things.

Malema said there was an occasion when he had to skip an examination to join his party members who were confronted by soldiers at the parliament during a State of the Nation address by the president.

“I was not going to attend the State of the Nation. When I heard that he called the soldiers to Parliament, I had to abandon that exam and go and lead from the front, because I was not going to allow a situation where EFF members were going to confront soldiers and I would be absent,” Malema said.

#MalemaGraduation Malema says certain compromises had to be made in order to achieve this News24 pic.twitter.com/5GqUyiSRU9

Malema’s degrees come after ridicule he said he received for his poor performance in high school especially in mathematics.

He was accompanied by his wife and grandmother at the ceremony on Tuesday where he was cheered when he climbed the podium to be decorated.

He climaxed the cheering by raising his clenched fist in the air as a show of solidarity and support after he was decorated by the principal and vice-chancellor Professor Mandla Makhanya.

The CiC Julius_S_Malema collected the 2nd Degree from UNISA. We are looking forward to the 3rd one. #MalemaGraduation! pic.twitter.com/QUZPAI3lYI

Julius Malema has been in politics all his life starting with the ruling African National Congress (ANC) since he was about 10 years old.

He climbed the leadership ladder in the party until his expulsion in 2012 when he was the ANC Youth League leader.

He formed the Economic Freedom Fighters (EFF) in 2013 which is based on South African revolutionary socialist ideologies.

The party is the third-largest in both houses of the South African parliament.