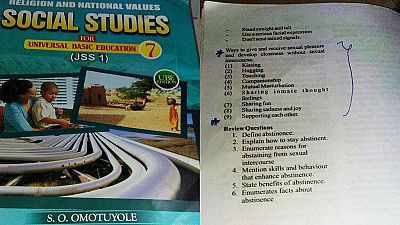 Nigerians are divided on the introduction of the comprehensive sex education (CSE) curriculum in schools to give students an understanding of their sexuality.

The West African country is among the most religious countries in the world with 186 million people made up of predominantly Christians and Muslims. With its over 300 tribes, Nigeria is seen as a conservative country.

These characteristics influence the divisions on the teaching of sex education in schools.

Nigeria has been praised by UNESCO for scaling up and sustaining the comprehensive sex education (CSE) programme in basic schools among a few developing countries in the world.

We must keep a close watch on what is being taught our children at school and re-educate them in line with scriptures. Please alert other parents and let’s protect our children.

The CSE brought forth text books for the government and private primary and secondary school students with lessons on abstinence and other sexuality topics. The children are between the ages of eight and 15.

One of such books is the Junior Secondary School (JSS 1) Social Studies textbook written by S. O. Omotuyole.

This book has been condemned for its content on Page 50 that spells out “ways to give and receive sexual pleasure and develop closeness without sexual intercourse”.

One parent, Bello Abdullahi, expressed concern on Facebook about the text book and called on other parents to protect their children and educate them according to the “scriptures”.

“We must keep a close watch on what is being taught our children at school and re-educate them in line with scriptures. Please alert other parents and let’s protect our children,” he said.

He received a diverse response from the public as some blamed the country’s educational board for the publication while others believe the time is right for sexual education.

The NGO Association of Concerned Mothers (ASCOM) has petitioned the Ministry of Education to withdraw the textbook for its “unwholesome and dangerous ideology.”

Also, the National Association of Proprietors of Private Schools (NAPPS) launched a campaign in July 2017 against the comprehensive sex education in schools to rather “impact moral values in the children”.

Meanwhile, reproductive health body IPAS has supported the introduction of CSE to reduce incidences of rape among children.

The Country Director of IPAS Nigeria Hauwa Shekarau said last week that adolescents needs to be equipped with information to prevent them from the various consequences of unprotected sex.

“Comprehensive sexuality education is not a taboo. Young people should be able to acquire sex education the appropriate way. If you don’t tell them the right things, they will get the information, whether right or wrong, elsewhere,” she said.

The News Agency of Nigeria (NAN) on Monday published a report carrying views of education stakeholders on the matter in the North West and North East states of the country.

They also expressed diverse views on the teaching of comprehensive sex education (CSE) in schools.

Some supported it while others disapproved of it citing religious reasons.

“Parents should not hide the truth from their children, but teach them what they need to know based on their level of comprehension and take them gradually as they develop. The rationale is to catch them young and prevent them from getting the wrong information from outsiders who may eventually exploit them,” Okene Oloruwagba, a mother told NAN.

“Sex education is an intuitive knowledge and in my opinion government should not introduce sexuality in school curriculum because it will corrupt the minds of teenagers,” Ustaz Abdulrahim Shuaibu, Muslim cleric said.

He was supported by a pastor, Ahmadu Samuel, who said: “Teaching children about sexual relationships apart from promoting immorality is like teaching a child to drive a car without explaining the traffic laws.”

The debate has heightened and the onus lies in the hands of the government to decide on scrapping sex education in schools, reviewing the policy or maintaining it as it is.