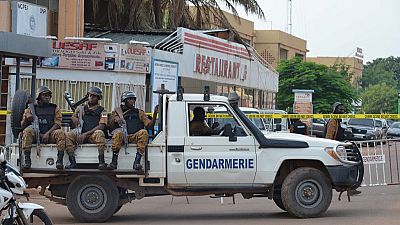 The African Union (AU) and the United Nations (UN) have condemned the terrorist attack in Burkina Faso’s capital Ouagadougou late Sunday night resulting in the death of 18 people and dozens injured.

AU Commission Chairman Moussa Faki Mahamat said in a statement on Monday that the AU reaffirms its full solidarity to the people and the Government of Burkina Faso in the face of the terrorist threat.

He called on the international community to support the G5-Sahel Joint Force to strengthen security cooperation on the regional level.

There can be no justification for such acts of indiscriminate violence.

The United Nations Secretary-General also condemned the act saying “there can be no justification for such acts of indiscriminate violence”.

He also reaffirmed the UN’s “commitment to the countries of the G5 Sahel as they scale up efforts to tackle multiple security challenges in order to promote peace and development in the sub-region.”

The overnight attack that occured at a Turkish restaurant in the capital ended Monday morning.

Burkinabe President Roch Marc Kabore declared three days of national mourning in the country in honour of the victims.

The president said in an earlier statement that the country will continue to fight and to do all it takes to defeat terrorism.