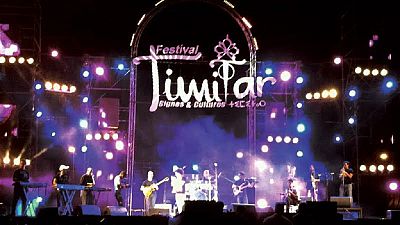 As one of the largest musical events in Morocco, the Timitar festival has no difficulty in drawing crowds in celebrating the region’s Amazigh culture.

Now in its 14th year, organisers say this year’s theme is “signs and culture” featuring performances from traditional and modern Moroccan musicians alongside contemporary international artists.

The annual festival features the music of Amazigh or “Free Ones”, also known as Berbers, who inhabited north Africa for thousands of years before the Arabs brought Islam to the region in the seventh century.

In the past, members of the Amazigh community have complained of prejudice against their tribes, with their music being confined to social and religious occasions.

But now, Amazigh artists proudly perform alongside popular global artists such as Malian Diva Oumou Sangare and the controversial Lebanese group Mashrou’ Leila who were recently banned from Jordan after being deemed to be against traditional Arab and Muslim values.

Mashrou’ Leila has broken ground in the Arab world with an openly gay lead singer and stances espousing gender equality and sexual freedom.

“Timitar festival welcomes Amazigh artists from the entire Morocco as well as Hassani artists and Arab artists. It also hosts international artists. We all share the same stages because we are all the same,” said Amazigh singer, Hassan Arsmouk.

Malian musician, Oumou Sangare performed at the event for the first time, saying it was a good opportunity to spread peace and equality through music.

“Music is the mean to spread culture at these festival and to tackle important issues in the world. It is not Africa that is divided. It is the entire world that is divided by wars. Why all these wars? Why do we have to harm ourselves. We are all human beings,” said Sangare.

This year, the four day festival featured over 40 artists and attracted an audience of 500,000 music fans from across the African continent.