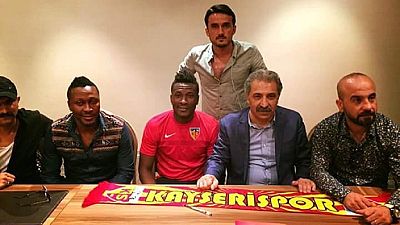 Ghana captain, Asamoah Gyan, has returned to Europe to ply his club career after a five year stint in Asia – where he played in the United Arab Emirates (UAE) and China.

Gyan on Wednesday (July 05) signed for the Turkish topflight side, Kayserispor. The club is named after the town in which it is located, Kayseri. The deal is said to be permanent even though other details remain unclear.

He had previously played in the Italian topflight with Udinese and Modenna (on loan) between 2003 and 2008. He transferred from Accra-based Liberty Professionals.

He spent two seasons playing for French side, Stade Rennais before entering the Premier League with Sunderland. In two seasons with the club, he played 34 games and registered 10 goals before leaving mainland Europe.

He joined UAE side, Al Ain FC in 2012 on loan before signing permanently later that year. He moved to China in 2015 with Shanghai SIPG (20 games, 7 goals), then returned to UAE on loan with Al Ahli Dubai.

At the national level, Gyan has been involved in all three World Cup appearances by the Ghana Black Stars. He scored their first ever World Cup goal against Czech Republic during Germany 2006.

He was part of the team in South Africa 2010 where Ghana missed out of a historic quarter-final appearance losing to Uruguay. He captained the team in the disastrous outing at Brazil 2014. He has played over 100 games in the national shirt and is the top scorer with 51 goals.