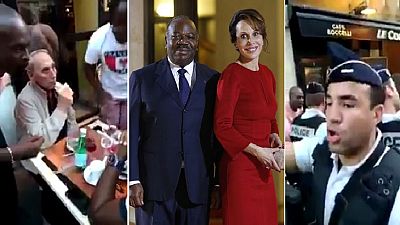 Edouard-Pierre Valentin, father of Sylvia Bongo – wife of Gabon President Ali Bongo, was recently attacked by some nationals of the Central African country in France.

A video circulating on social media showed about a dozen men shouting and banging on a table on which Ali Bongo’s father-in-law and a former minister sat at a Paris cafe.

The ‘attackers’ were shouting insults at him and accusing his son in law of overseeing a fraudulent election that led to a political crisis in August last year. They repeatedly referred to the regime as a criminal one that was killing people back home.

It took the intervention of Paris police to bring the almost violent situation under control. Mr Valentin is seen as an ally of the Bongo family having made a fortune in the area of insurance and oil in the country.

Some media portals have reported that Ali Bongo summoned the ambassador to France with strict instructions that his father-in-law be given more robust security.

Bruno Ben Moubamba, a leading opposition chief who run as independent candidate in the 2009 polls condemned the action.

He was also a candidate in the 2016 presidential election, and was subsequently appointed Deputy Prime Minister and Minister of Urban Development and Housing as part of an all inclusive government.