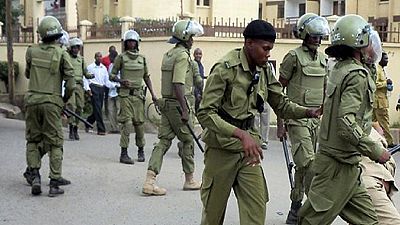 Tanzanian police have come under heavy criticism for allegedly manhandling disabled protesters on Friday in the capital Dar es Salaam.

The police were reported to have violently stopped the protesters due to lack of authorization as they were gathering for a peaceful demonstration, local media The Citizen reported.

A number of disability rights groups on Monday called on the government and the Inspector General of Police Simon Sirro to take action against the uniformed men or face legal action.

“We would like to know how the IGP has considered this matter because those people were not criminals. They only wanted reconciliation to resolve their long complaints,” an executive member of civil group Voice of Women with Disabilities, Stella Jailos was quoted by The Citizen.

We would like to know how the IGP has considered this matter because those people were not criminals. They only wanted reconciliation to resolve their long complaints.

The incident was captured in a video that elicited a lot of outrage against the police.

“The actions towards the disabled people are disturbing and unacceptable. We want the government to take proper steps to fix this and ensure something like this doesn’t happen again,” said Ado Shaibu, spokesperson for opposition party Alliance for Change and Transparency at a news conference on Sunday.

The police were not available for comments on the reported incident.

This action follows a similar one by the police in Angola in April who physically engaged in a fight with some protesting members of the National Association of Disabled People of Angola.

A video, first posted online by Human Rights Watch researcher Zenaida Machado, showed one protester fall off his wheelchair during the struggle that drew the attention of others, compelling the policemen to leave the scene.

The activists were reportedly heading towards a meeting point to protest the lack of accessible infrastructure and equal opportunities in education and employment for persons with disability.

Human Rights Watch said in a statement that the protesters were blocked by the police in a move to disperse them from holding an unauthorized protest.

They called on the government to respect its obligations as a party to the Convention on the Rights of Persons with Disabilities.