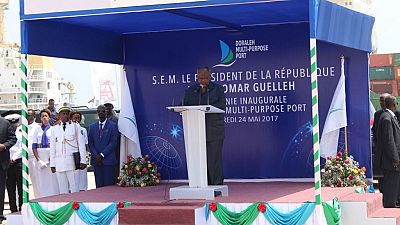 The port is one of four new ports in the Horn of Africa nation co-funded by China to establish Africa’s largest free-trade zone that can handle $7 billion of goods every year, a statement by the port authority said.

The bulk terminal of the Doraleh port can handle 2 million tonnes of cargo a year and offers space to store 100,000 tonnes of fertilizer, grains and warehouses for other goods, the statement added.

The break bulk terminal can also handle 6 million tonnes of cargo per year with 40,000 slots for vehicles at the RO-RO terminal.

“With this new world-class infrastructure, Djibouti confirms its position as a major trading hub for the continent. We are proud to show the world our capacity to deliver major infrastructure projects – some of the most technologically advanced on this continent,” Aboubaker Omar Hadi, chairman of the Djibouti Ports and Free Zones Authority (DPFZA) said at the opening ceremony on Wednesday attended by Djiboutian President Ismail Omar Guelleh and Somali President Mohammed Abdullahi.

President Mohamed Abdullahi attends with his #Djibouti counterpart Ismail Guelleh the inauguration of the modern port of #Doraleh.#Somalia pic.twitter.com/32ySqgQ3Z8

Djibouti port is the main pointof entry for goods from Asia, and also serves landlocked Ethiopia which recently opened the Chinese funded 752 kilometre-Addis Ababa-Djibouti railway that links to the port.