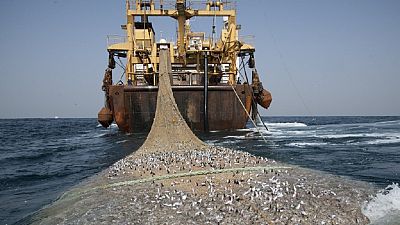 Authorities in West Africa have detained eight Chinese vessels for fishing illegally and the boat owners could be subject to millions of dollars in fines, officials at environmental group Greenpeace said.

Inspectors from Guinea, Sierra Leone and Guinea-Bissau boarded the ships off their respective coasts. They found them to be violating regulations on catching protected fish and using nets with small holes to facilitate bigger hauls.

The arrests came after a two-month regional patrol on a Greenpeace ship, the Esperanza. The patrol, carrying local inspectors from West African countries, aimed to highlight the problem and supplement national efforts, which are often hamstrung by budget and technology constraints, making detentions relatively rare.

West Africa has some the richest waters in the world, which have long been fished by local boats. But stocks are being depleted as industrial trawlers, some of which are operating illegally, comb the oceans from the seabed to the surface, Greenpeace says.

A recent study by Frontiers in Marine Science estimated West Africa’s annual losses from illegal and unregulated fishing at $2.3 billion.

The Esperanza patrol found 11 vessels in breach of regulations out of 37 stopped and reported the breaches to local shipping authorities, who towed them back to port. Two other foreign vessels were also found to be non-compliant, including a European ship with shark fins aboard, and further investigations are underway, Greenpeace said.

“This is a surprisingly high amount of arrests, especially considering that the vessels knew about our patrols in advance,” Greenpeace’s Pavel Klinckhamers, who attended the patrols, said on Tuesday.

Some of the ships have since been released after paying fines. Others are still under investigation. Greenpeace did not name the firms responsible for the infractions.

Chinese Foreign Ministry spokesman Geng Shuang said China consistently opposes all forms of illegal fishing, and demands that Chinese-invested firms operate legally and according to the rules and protect the maritime environment.

“China hopes that the relevant countries can enforce the law in a civilised manner, handle it in accordance with the law and protect the legal rights of the relevant Chinese companies and their employees,” Geng said.

An EU official in Dakar was not immediately available for comment. The EU, which imports around 874 million euros ($953.71 million) of fish products legally each year from West Africa, is subject to fishing quotas and pays compensation to local governments. It has also provided funding to crack down on illegal fishing.

Government officials in Guinea-Bissau and Sierra Leone were not immediately available for comment.