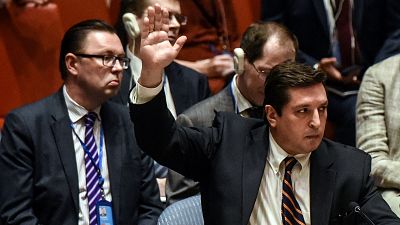 <p>Russia has blocked a draft resolution at the United Nations condemning last week’s toxic gas attack in Syria.<br /> It is the eighth time during Syria’s six-year war that Moscow has shielded ally President Bashar-al Assad. Russia said the resolution had implicitly apportioned blame.</p> <p>“The draft of the “troika’s” resolution assigned blame before any investigation, objective and independent investigation. This is contrary to any standards of justice,” said Vladimir Safronkov, Russia’s deputy envoy to the UN.</p> <p>The US, Britain and France were the authors of the resolution. François Delattre, French Ambassador to the UN didn’t hold back on expressing his disappointment.</p> <p>“France is devastated by the result of this vote. We have however tried to have a constructive discussion on this draft, but we fail once again to be on the level of responsibilities that we ourselves have set up and of fundamental values that we’re bound to enforce.”</p> <p>China, Ethiopia and Kazakhstan abstained from the vote, while Bolivia joined Russia in saying no. Ten countries voted in favour of the text.</p> <p>The April 4 gas attack on the town of Khan Sheikhoun killed scores of people. Western powers say the attack was carried out from the air and that Syrian rebels do not have any aircraft. Syria’s government has denied responsibilty and has claimed the chemicals were stored on the ground by rebels.<br /> The West is pushing for Assad’s government to provide access for investigators.</p> <br /> <blockquote class="twitter-tweet" data-lang="en"><p lang="en" dir="ltr">UN <span class="caps">SYRIA</span> <span class="caps">ATTACK</span> <span class="caps">VOTE</span> Measure fails; Russia vetoes and China abstains <a href="https://t.co/TcvxHZ2Yrc">https://t.co/TcvxHZ2Yrc</a> <a href="https://t.co/vwYLUfmtQE">pic.twitter.com/vwYLUfmtQE</a></p>— D100 Radio (@D100Radio) <a href="https://twitter.com/D100Radio/status/852253930423599104">April 12, 2017</a></blockquote> <script async src="//platform.twitter.com/widgets.js" charset="utf-8"></script>