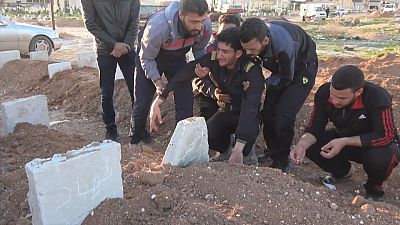 Some of the 72 victims of the suspected gas attack in northern Syrian were buried on Wednesday as their families grieved. One man lost his twin daughters and his wife.

“It was an airstrike by the criminal air force. I took my wife and children out of the house. Five minutes later, we started smelling a strange odour, said Abdel Hameed al-Youssef.

Russia suggests the civilians were poisened by rebel weapons on the ground, US Secretary of State Rex Tillerson has laid the blame firmly on President Assad’s forces.

“There’s no doubt in our mind that the Syrian regime under the leadership of Bashar Assad is responsible for this horrific attack. And we think it’s time that the Russians really need to think carefully about their continued support of the Assad regime,” said Tillerson.

The United States, Britain and France have proposed a draft UN Security Council resolution that would condemn the attack. However, the Russian foreign ministry has called it unacceptable saying it is based on “fake information”.

“Unfortunately without making any attempt to understand what happened, based totally on fake information and false stories, the United States of America, France, United Kingdom have again planted – as this can not be called a proposal, it is just planting – a draft resolution to the United Nations Security Council, a draft resolution which has a completely anti-Syrian character,” FM spokesperson Maria Zakharova said in a statement.

Russia is pressing its case blaming the rebels and has said it will veto the draft if it goes to a vote without further consultations. Earlier the US ambassador to the UN appeared to threaten unspecific unilateral action if the Security Council members could not agree.

According to UK-based monitoring group the Syrian Observatory for Human Rights, 20 children and 52 adults were killed in the chemical incident in Khan Sheikhoun, Idlib province.

The World Health Organization said some of the victims had symptoms consistent with exposure to nerve agents such as Sarin.