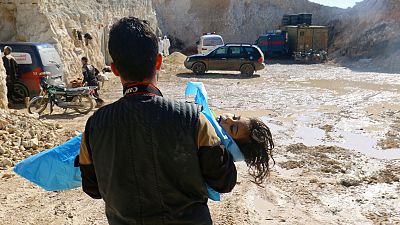 Russia has said chemical weapons that killed as many as 100 people in the town of Idlib leaked from a rebel weapons facility after it was bombed by the Syrian air force.

The incident has been denounced as one of the worst horrors yet in Syria’s civil war.

US secretary of state Rex Tillerson yesterday blamed Bashad al Assad for the “barbaric attack” and urged Russia to reign in the Syrian president.

But the Russian Defence ministry reacted this morning by saying the victims symptoms were consistent with previous attacks by rebel fighters.

The ministry spokesman said in a statement, posted online by Russia’s state news agency Tass, that Syrian planes carried out an airstrike on a “major ammunition storage facility” operated by rebels.

“The territory of this storage facility housed workshops to produce projectiles stuffed with toxic agents,” he said.

“From this major arsenal, chemical-laden weapons were delivered by militants to Iraq.

“Their use by terrorists was confirmed on numerous occasions by international organizations and official authorities of the country.”

A US government source said the Trump administration believes the chemical agent sarin was responsible for the deaths in a rebel-held area of the northwestern province of Idlib.

That verdict is shared by a British volunteer doctor treating people choking and foaming at the mouth.

“This hospital is now being overwhelmed with patients that have been hit by some sort of chemical,” said Dr. Shajul Islam.


This is the latest from the Sarin attacks. Patients are still flooding in. This child's been rushed in w/o any family. They're probably dead pic.twitter.com/B4i9W97UfA


The British-based Syrian Observatory for Human Rights said the attack in Khan Sheikhoun killed at least 58 people including 11 children.

But The Union of Medical Care Organizations, a coalition of international aid agencies that funds hospitals in Syria, said at least 100 people had died.

“I was asleep when the warplane hit us,” said one little boy, in a hospital.

“I went outside with my dad but my head started hurting. I fell asleep and woke up to find myself here.”

Some of those fighting for life were taken for medical help to Turkey, which backs the anti-Assad opposition.