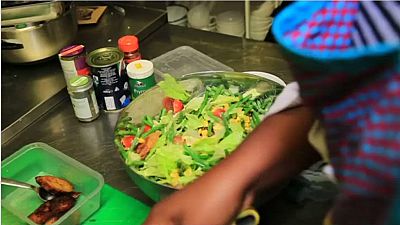 The vegan movement is fast gaining popularity though still gaining momentum in Africa.

Its followers do not eat meat, fish or poultry and do not consume other animal products like eggs or dairy.

But this Nigerian-born British chef is defying the odds by preparing vegan cuisine with an African twist at this pop-up restaurant in London.

“I feel people are curious about vegan food because of the attention its getting in the media these days and when you combine that with the fact that it is vegan Nigerian food fascinated and want to try something different. I feel that there are so many restaurants out there nowadays but African food for the most part is under-represented and so wherever people can find, I guess, difference they are going to go there.”

Her interest in vegan cuisine peaked after seeing a gap in African restaurants. Very few offer vegan options on their menus and she wanted to cater to people looking for tasty, healthy vegan meals.

Not only vegans come to this restaurant but also meat eaters who out of curiosity say they are usually impressed by what they get in the menu.

This is what some guests in the restaurant said:

“It was amazing! I particularly liked the dish with the plantain – I think it was the salad. It had plantain and the onion kind of like breadcrumbs in it. That was really nice. But Tomi’s food is really good anyway. This is the second supper club I’ve been to. I love her food.”

Tomi infuses her dishes with different flavours using staple ingredients that are found in many traditional non-vegan, Nigerian dishes. She attributes her success to the flavours she adds to some dishes, mimicking the texture of meat with specific vegetables and spices.

“For die-hard meat-eaters I focus on flavour because I do feel that is where the crux of it is. Texture is another one as well. So if you can find ways of using vegetables that have a meaty consistency and you use that in normal foods that would contain a lot of meat, then they don’t feel as if they are missing out too much because they do have that texture of meaty food without the animal products included in it,” said the chef.

She shares recipes inspired by Nigerian cuisine in her website “The vegan Nigerian” and says she plans to expand her menu and explore other vegan dishes from various African countries.