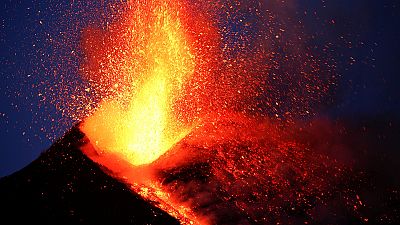 A BBC camera crew captured the exact moment Mount Etna exploded, as they filmed at Etna’s summit on the island of Sicily.

As the volcano spewed out rocks and magma the BBC crew and tourists visiting the site ran for cover.

Back at hotel now after Etna explosion. Here's NewsCamerawoman with the massive hole a lump of rock burnt through her coat. pic.twitter.com/GVSyj3Sa9A

Ten people suffered injuries as a result of the eruption.

The moment of the Etna explosion – filmed by NewsCamerawoman - she, alisonfrancis & I VERY relieved to be safe.
https://t.co/YewpahruyW

Pippa Mazzaglia is an Etna guide who caught got up in the eruption:
“We were up with a group of twenty people and suddenly there was a small phreatic explosion. Lava flow hit some snow and the contrast between cold and hot generated this explosion.”