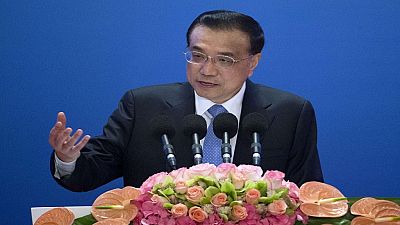 The economy is already growing at its slowest rate in more than a quarter of a century and the latest target unveiled at the opening of China’s rubber-stamp parliament is lower than a 6.5-7.0 percent range he set last year.

“In the past year, China’s development has faced grave challenges posed by a great many problems and interwoven risks and dangers both at home and abroad,” Li said in his annual state-of-the-nation speech to the National People’s Congress (NPC).

China aims for “GDP growth of around 6.5 percent, or higher if possible,” he said, despite even “more complicated and graver situations” this year.

The target is below expectations and indicates authorities will prioritise risk-control over short-term growth.

The NPC gathers thousands of delegates from across China to Beijing’s vast Great Hall of the People and is touted by the ruling Communist Party as proof that it answers to the people despite its monopoly on power.

China is trying to pivot from hyper-fast growth based on investment, heavily-polluting industries, and exports towards a steadier consumer-driven model.

But the transition is complicated by slowing growth, a slumping currency, bloated industrial firms, capital flight abroad, and fears of a looming housing bubble and bad-loan crisis.

China’s “systemic risks are under control. But we must be fully alert to the buildup of risks,” Li said.

“We will ensure order in the financial sector and build a firewall against financial risks”.

Li’s report also set an inflation target of “around 3 percent.”

The premier’s lengthy address touched on a broad range of other key national issues and included a pledge to maintain the stability of the yuan currency and cut severe air pollution.

The premier said China would “resolutely oppose” any moves towards Taiwan independence.

US President Donald Trump had riled Beijing by signaling support for Taiwan – which Beijing claims as its own – and opposition to the expanding Chinese presence in the South China Sea, though the US rhetoric has softened lately.

China watchers will be looking during the 10-day NPC session for clues on President Xi Jinping’s political ambitions ahead of this autumn’s pivotal Communist Party Congress, an event held every five years and which has far greater bearing on politics than the NPC.

Since taking over in 2012, Xi has consolidated power more rapidly than any leader in decades, but has shaken the party with an anti-graft crackdown and moves to manuever allies into high positions.

He is expected to unveil a leadership shuffle at the autumn gathering amid speculation it could indicate his plans to stay on beyond the traditional 10-year term.

“But the economic risks won’t prevent Xi Jinping from continuing to consolidate his power and put his own men in top positions,” Cabestan said.

Authorities have shut down various industries to prevent the country’s notorious smog from embarrassing delegates and, as every year, tightened security nationwide.

Li promised the government would “make our skies blue again” with pollution-reduction measures.

The NPC closes March 15 with Li’s annual press conference — the only time foreign journalists can quiz an official in China’s power elite, though questions are screened in advance.