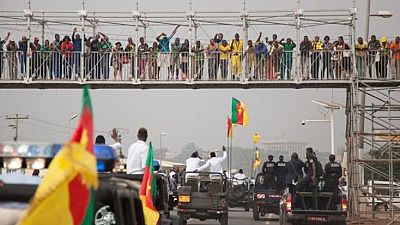 The indomitable Lions of Cameroon trophy celebration after their 2017 AFCON victory in Gabon is facing a huddle in the English regions of the country.

The trophy has been touring some major cities in the west African country with a bid to foster national unity which is currently facing series of protest, President Paul Biya had called on the citizens to come out massively and welcome the trophy.

Biya said the team merits congratulations as a means of encouraging other youths to be hardworking and defend the interest of their country.

However, the trophy witness cold reactions when it arrived in Bamenda, northwest of the country and one of the English speaking parts of the country. Local Media reports hundreds of youths booed and boycotted the event.

Bamenda has been the center of recent civil unrest in the country, demonstrations commenced three months ago in the region when local lawyers and teachers in the area went on strike.

Youth leader in the region, Gregory Achu said the government response to the current situation has made things worse.

English-speaking professionals have refused to work in the northwest and the southwest to protest what they called an overbearing use of French in schools and courts.

Cameroon’s constitution says the country is bilingual. While the government has made some reforms and promised others, it has refused to release dozens of people detained in relation to the unrest.

The strike has widened with people in English-speaking areas shutting their businesses on Mondays, Tuesdays and Thursdays. Schools also remain closed.