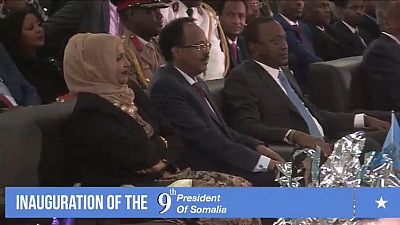 Security is high in Somalia as the country witnesses the investiture of its 9th President, Mohammed Abdullahi Mohammed Farmajo.

The event is taking place at the secured Mogadishu International airport where his election took place weeks back.

Catch a playback of Ethiopian PM and Kenyan President’s address

Except for Eritrea, leaders of all Horn of Africa nations are present at the event. Ethiopian Prime Minister, Hailemariam Desalegn; Omar Guelleh of Djibouti and Kenya’s Uhuru Kenyatta are all present.

The former President Hassan Sheikh Mohamud is also in attendance, he has been roundly hailed by the three presidents for overseeing an orderly transition of power after he lost the last polls.

BREAKING: Leaders of Djibouti, Kenya and Ethiopia all have arrived in Mogadishu to attend inauguration of Pres Farmajo: UN #CaleemaSaarka

President of #Kenya, PM of #Ethiopia & other foreign leaders making their remarks at the inauguration of new #Somalia Pres #Farmajo. pic.twitter.com/U2elwd9wph

BREAKING: We'll respect regional countries and not to interfere them, we expect the same: Farmajo

BREAKING: Djibouti will spare no effort in standing by you; long live Somalia: Pres Guelleh

BREAKING: Pres Guelleh to Pres Farmajo: The support you received is a message from the public that you will have to reflect that trust.

BREAKING: It's our wish to see a stable Somalia that contributes to regional stability and prosperity. Desalegn

BREAKING: You have made our region and the continent very proud in the way you conducted your election: Kenyatta

Kenyatta: You assume office at a time of great expectation; this is both here and in the diaspora.

BREAKING: I assure you of Kenya support, my admin will stay steadfast in search for sustainable peace in Somalia: Kenyatta