Ethiopia’s long distance athlete, Feyisa Lilesa, who became famous for making an anti-government gesture while participating in the 2016 Rio Olympic Games has finally been reunited with his family in the United States, where he is currently based after being granted asylum.

He won the silver medal in the men’s marathon in Rio after finishing the 42-kilometer race. He later claimed that his life was in danger. He sought for asylum in the United States and has been living there since leaving Rio.

He received his wife and two kids at the Miami International Airport. It was the first time meeting them since he left Ethiopia to Brazil – a period that stretched to seven months back. He remains concerned about injustices in Ethiopia and has promised to continue to ‘‘speak out.’‘

As I celebrate this small personal victory, I want to make sure that we don't forget the plight of millions of Oromo and other Ethiopians who are still being killed, beaten, imprisoned, dispossessed and kept in poverty.

But in a statement he posted on Facebook, Lilesa said even though he was happy to meet his family, he still remained worried over the clampdown of his people by the government back home. He described the reunion as a ‘small personal victory’ but said he was still committed to the plight of several oppressed Oromos in Ethiopia.

‘‘But despite my physical safety here in the US and now a family reunion, the Ethiopian government’s ongoing abuse of the Oromo people gives me no rest. No one builds a family with the intention of going into exile. Instead to live in one’s own country and ensure familial continuity.

‘‘Unfortunately, exile, however dreadful, has become my fate and the fate of many Oromos. As I celebrate this small personal victory, I want to make sure that we don’t forget the plight of millions of Oromo and other Ethiopians who are still being killed, beaten, imprisoned, dispossessed and kept in poverty,’‘ his statement said.

He made an anti-government gesture at the end of his track event. He crossed his arms above his head as he finished the event as a protest against the Ethiopian government’s crackdown on political dissent.

Ethiopia is currently under a six-month state-of-emergency imposed last year to help quell anti-government protests in the Amhara and Oromia regions. The protests have led to mass arrests of political opposition and hundreds of people are said to have died in the security clampdown. 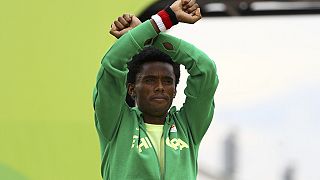