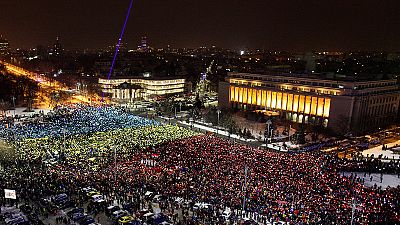 There appears to be no let up in the nightly protests in Romania. At least 50,000 turned out again on Sunday in the capital Bucharest.

Although the government has rescinded an emergency decree that could have freed dozens of officials jailed for corruption, parliament has still to confirm its withdrawal.

Analyst Dan Ionescu said everyone is waiting for the parliamentary vote:
“There is a broken trust between the people and the ruling party and they are forced to invalidate this act, if they do it so, we will see the final reaction actually.”

Romania’s ruling coalition holds a big majority in parliament and many of the protesters are sceptical as to whether the decree will really be pulled.

“It is a message to our government that they can not decide whatever they want, it is a message to cancel this special law that is protecting the corrupt people,” said one man taking part in Sunday night’s rally.

Another wants the protests to continue:
“Next week I would like the people to protest more and continue what they have started until we see the government work as they should and for their people and not against them.”

Despite the outrage over the proposed changes to the criminal code. the government is refusing to quit. It insists the public has misunderstood its reform bid which it claims would have reduced pressure on Romania’s overcrowded prisons.

The decree, decriminalised the abuse of office in cases where the damages were less than 200,000 leu (about 43,200 euros) and was coupled with a mass pardon for non-violent convicts serving short jail terms. 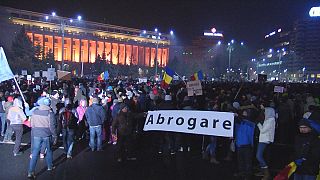