Iran mourns "a great man of the revolution" 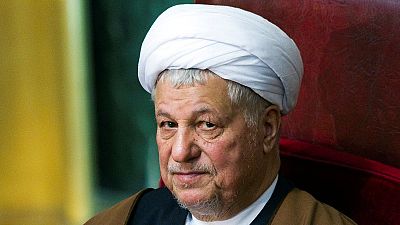 Iran has begun three days of national mourning following the death of former President Hashemi Rafsanjani.
The 82-year-old died in hospital on Sunday after suffering a heart attack.

Officials, relatives and the general public have been paying their respects as his coffin lies in Jamaran prayer hall, the famous residence of the founder of the Islamic Republic Ayatollah Khomeini.

Iranian Foreign Minister Javad Zarif said Iran has lost one of the greatest pillars of the revolution, friend of Imam Khomeini and a friend of our current supreme leader.”

Two main figures of reform and moderation in #Iran by #Rafsanjani’s coffin. Khatami and Zarif. pic.twitter.com/STw2GcQFtm

“All the people of the revolution, all conservatives and moderates have come once again to the Imam Khomeini’s mosque and they got together to show that Hashemi was at the centre of unifying this country,” said one woman.

Rafsanjani a “moderate” only in context of Iranian theocracy. Was no friend of the West…or, more importantly, the Iranian people.

Rafsanjani served for two terms as president from 1989 to 1997, and is viewed by many as a pragmatist and great political survivor. He was a founding member of Iran’s 1979 Islamic revolution. But later his allegiances shifted towards reformists.

His belief that reforms would help prolong Iran’s Islamic governance contrasted with those of Supreme Leader Ayatollah Ali Khamenei who fears such changes could hasten its demise.

His death will deal a blow to moderates, particularly the current president, Hassan Rouhani, of whom he was a major backer.

Rafsanjani also championed improved relations with Gulf Arab states, was known to have good ties with senior Saudi officials and was seen as a key figure who could have resolved rising tensions between the regional rivals in coming years.

Reporting for euronews in Tehran, Javad Montazeri said that the last page in the life story of Hashemi Rafsanjani had been turned:

“Here in the presence of his supporters and on Tuesday, January 10, in front of the University of Tehran, everyone will make their final farewells.”