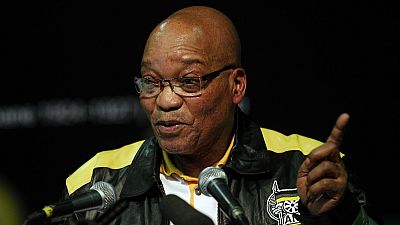 South Africa’s President Jacob Zuma has reiterated his party’s solidarity with the “oppressed people of the world” citing Palestine, Western Sahara and Cuba.

At the 105th anniversary celebration of the African National Congress in Soweto on Sunday, Zuma who is also the president of the party said they discourage travel to Israel in solidarity with the people of Palestine.

“The people of Palestine continue to suffer in their rightful quest for self-determination … We reiterate that we firmly discourage travel to Israel for causes not related to fostering peace in the region,” Zuma said in a speech to thousands of party supporters.

He expressed the party’s support of the December 2016 UN resolution against Israel and called on the Palestinian people to unite and achieve their goal.

We reiterate that we firmly discourage travel to Israel for causes not related to fostering peace in the region.

Jacob Zuma said he will also continue to offer support and solidarity for the Polisario Front aiming to end Moroccan presence in the Western Sahara.

“We remain unwavering in our support for an independent and free Western Sahara,” he stressed.

Zuma also advised the incoming President of the United States, Donald Trump, on his country’s relations with Cuba which was restored diplomatically in 2015 since the Cold War in 1961.

“The ANC continues to stand with the people of Cuba and calls on the United States to return Guantanamo Bay and lift the economic embargo. The ANC urges the incoming US administration to continue efforts aimed at normalising relations between the two countries,” he added.

The African National Congress is the first political party in South Africa founded on January 8, 1912 to end the apartheid system.

Led by its president Jacob Zuma, thousands of supporters gathered in Soweto to celebrate the party through prayers, speeches, awards ceremony and a musical concert.